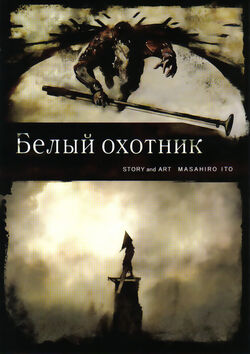 Белый охотник (Belyj okhotnik), translated to White Hunter in English, is a 6-page comic written and illustrated by Masahiro Ito. It was packaged alongside the Silent Hill: Zero Original Soundtracks album.

The "Angel" (Ангел) descends from the sky, approaching the statuesque "White Hunter" (Белый охотник). He blows into his trumpet, firing a bullet out of it and into an opening in the White Hunter's helmet. The White Hunter awakens and readies his lance-like weapon, extending it to the sky and impaling the Angel. The force of the impact knocks the Angel's mask off, revealing a vaguely human face.

The White Hunter is "programmed" to watch and hunt these Angels, though he has no idea why. He then resumes his static position, Angel impaled on his spear.

The Angel is largely reminiscent of the Slurper enemy in Silent Hill 3. He is also fitted with traditionally cherubic elements, such as the angel wings and long trumpet.

The White Hunter is designed nearly identical to the Red Pyramid Thing in Silent Hill 2. Instead of the red helmet however, his helmet appears to be white. The weapon he wields resembles a large switchblade or box cutter with a retractable blade, apparently triggered by ramming the bottom edge into the ground.

Thematically, the comic and its imagery appear to resemble the battle between Saint Michael and Satan. However, the true nature of the comic's inspiration is yet unknown.