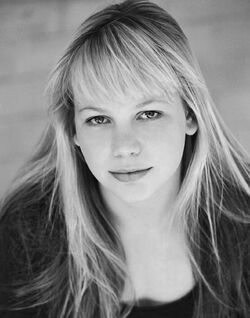 Adelaide Clemens is an Australian actress who is best recognized for her roles in X-Men Origins: Wolverine and Love My Way.

Adelaide was born in Brisbane, Australia, but has British heritage. Throughout her childhood she lived in several countries, including Japan, China, and France before returning home to Australia at the age of twelve.

Adelaide first appeared in an episode of Blue Water High. She was later nominated for a Most Outstanding New Actor award at the Logie Awards. She later went on to appear in films such as X-Men Origins: Wolverine and Wasted on the Young and has also had guest roles in several television shows.

It has not been uncommon for her to take roles in horror films, starring in films such as No One Lives.

Adelaide stars in the 2012 film Silent Hill: Revelation as the teenage Sharon Da Silva using the alias "Heather Mason". In some scenes, she also plays the teenage version of Dark Alessa: Memory of Alessa.

Adelaide with Heather Marks and M.J. Bassett on set.

Adelaide as both Heather Mason and Memory of Alessa.

Adelaide and Kit Harington at the premiere of Silent Hill: Revelation.
Add a photo to this gallery
Retrieved from "https://silenthill.fandom.com/wiki/Adelaide_Clemens?oldid=200502"
Community content is available under CC-BY-SA unless otherwise noted.