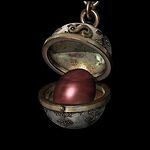 Aglaophotis is a red liquid which is obtained from the refinement of an herb of the same name. It has the ability to dispel demonic forces and grant protection against such forces to those who use the item.

First seen in Silent Hill, it also plays a role in Silent Hill 3. Aglaophotis plays an important role in both games, as its use in the first game heavily affects what ending the player will receive.

A memo in Silent Hill 3 gives a brief description of Aglaophotis.

Aglaophotis
Red liquid or crystals resembling
blood. According to the Kabbalah,
the name is taken from an herb with
the power to dispel evil spirits. It is
said to grow in Arabian deserts.

It may be vaporized or applied as
a poultice to guard against demons.
It is powerful, but as it is rare, it is
extremely difficult to obtain.

The novelization says it is completely odorless and thinner than blood.

Dr. Michael Kaufmann, director of Alchemilla Hospital, came into possession of at least two vials of the red liquid. How he obtained them is unknown, though it seems likely from a later conversation with Dahlia Gillespie that Kaufmann was holding onto the substance in the event that Dahlia's plans went in a direction he didn't like.

As Harry Mason explores the town of Silent Hill looking for clues as to the whereabouts of his daughter Cheryl, he comes across Alchemilla Hospital. While searching the hospital, Harry finds a broken bottle of Aglaophotis (then unknown) on the floor in Kaufmann's office. Harry can take the empty plastic bottle from the nearby kitchen and collect a sample and use it to save Cybil Bennett when she is found possessed by a parasite in the merry-go-round at the Lakeside Amusement Park.

Harry can continue investigating Kaufmann's involvement and the Aglaophotis in the Resort Area of Silent Hill. Before reaching the boathouse to meet Cybil, Harry can enter Annie's Bar and save Dr. Kaufmann from an attacking monster. Further investigation of Kaufmann's tracks leads to the discovery of a vial of Aglaophotis hidden in Kaufmann's motorcycle.

If Harry saves Kaufmann, he will appear during Harry's final confrontation with Dahlia in a place known as Nowhere. After Alessa Gillespie is brought to her true form, Kaufmann will appear to intercept Dahlia's plans. He proceeds to shoot Dahlia, then takes the vial of Aglaophotis previously hidden in the motorcycle and hurls it at the combined form of Alessa and Cheryl Mason. The vial breaks and coats the entity in the fluid. Through the Aglaophotis's exorcising power, the "god" imbued within Alessa is forced out as the Incubus, a creature created from Dahlia's vision of God.

Heather Mason, the reborn identity of Alessa Gillespie and Cheryl Mason, was given a necklace by her father Harry as a child. Containing a red jewel, it is revealed that the crystal is actually a small capsule of Aglaophotis.

How he procured the sample is unknown. In the Book of Lost Memories, it is stated that "It would seem that after the first game, Harry once again procured some of the liquid for the sake of his daughter", which suggests that the sample in the necklace is not what Harry found in Silent Hill.[2]

When confronted by the machinations of the Order priestess Claudia Wolf and the prospect of giving birth to the cult's patron deity (as had been intended for Heather Mason's previous self, Alessa Gillespie), Heather instead ingests the capsule of Aglaophotis and proceeds to vomit up the unborn fetus. Claudia, in desperation, consumes the fetus and births an incomplete form of God instead.

Aglaophotis is an artifact found during the "Digging Up the Past" sidequest in Port District. Murphy Pendleton remarks that it smells bad; however, this would contradict the novelization, as there it is described as odorless.

The Aglaophotis Locket is an equippable artifact that appears in Silent Hill: Book of Memories. The artifact is rewarded to the player by Valtiel after completing his mission in Zone 13. Its description is, "A small locket containing a peculiar red liquid, said to dispel evil forces."

Below are the stats which are affected when equipping this artifact:

Aglaophotis may have been a factual herb, sometimes connected in identity to the European peony. Though the authenticity of the text is often times called into question, Aglaophotis is named as an element needed to work spells in the Simon Necronomicon.

The Greek doctor Dioscorides named Aglaophotis as a member of the peony family, Paeoniaceae. The European peony itself was used as a medicinal herb and is named for physician Paeon, a disciple of Asclepius, the Greek god of healing.

Various preparations of peonies are used in traditional Chinese medicine as an antifungal, and also to treat wounds, pain, fever, and spasms (antispasmodic), and central nervous system incentives. The herb has been used to preventive measures against nightmares in the 19th century; it also was used for female infertility treatment that would stimulate uterus muscles. Ironically, it has a vast influence against Incubus.

In certain cultures, it is believed that uncontrollable movements of the body can be a sign of possession by a supernatural being. This could infer that the use of Aglaophotis, in the Silent Hill series, to dispel evil, is a clever wordplay on the actual medicinal properties of various species of peonies.

Aglaophotis can also be found in the Kabbalah. It was used as a medicinal herb that had the effect of expelling evil. Simultaneously, Aglaophotis has been known to be mentioned in works of occultism, the exact inverse of what would be said in a supposedly holy book.

Aglaophotis in the plastic bottle.

Aglaophotis spilled in the Director's room.

Concept art of the hidden Aglaophotis.

Harry takes Aglaophotis from the motorcycle.

Kaufmann swipes the Aglaophotis from Harry.

Vial of Aglaophotis spins in the air.

Alessa moments before Aglaophotis spills out.

Aglaophotis on Alessa.
Add a photo to this gallery

Heather's Aglaophotis.
Add a photo to this gallery
Retrieved from "https://silenthill.fandom.com/wiki/Aglaophotis?oldid=202285"
Community content is available under CC-BY-SA unless otherwise noted.