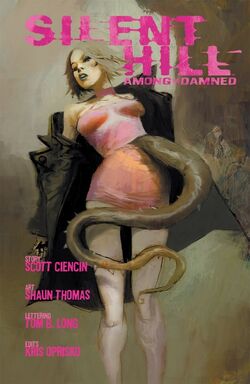 Among the Damned was a one-shot story published in 2004 with art by Shaun Thomas and written by Scott Ciencin. In addition to being individually printed, it was also collected in Silent Hill: Three Bloody Tales, a trade paperback collection, alongside Paint It Black and The Grinning Man.

Taken from the back cover.

In a gripping tale of bone-chilling terror, writer Scott Ciencin (Dying Inside) and artist Shaun Thomas follow a young soldier suffering from survivor's guilt into the darkened confines of Silent Hill. There he will find a doomed soul that will change his life forever...or end it.

Jason, a former soldier, is haunted by recurring dreams of an attack on his unnamed military unit. Having decided to kill himself, the young man sets off for a mountain ridge that he dreams of often, before the dreams warp into the aforementioned attack sequence. Before he can, though, he is sidetracked by an incursion into Silent Hill. Inside, he comes to a police station seeking help, but finds only strange creatures. Defending himself with a nearby shotgun, Jason proceeds to kill the creatures, when a woman named Dahlia, a missing singer, enters the building. Using the opportunity to run, Jason and his impromptu partner try to run, only to be confronted by a large gang of monsters. When things seem bleak, however, Aaron, a former soldier in Jason's unit who had been killed in the ambush, appears. Looking rather monstrous himself, Aaron offers assistance to the pair by dispersing the monsters with a hand grenade. Back to back, Aaron, cryptically, remarks that Jason has a free pass, for now. Yelling at his old friend to run, Aaron takes the fight to the horde of creatures.

Finding shelter in a place called Sanctuary by those residing with, Dahlia, having been wounded in their previous encounter, passes out. When she recovers, the pair make an attempt to escape Silent Hill. Before the pair gets far, though, Aaron and the other members of Jason's old unit arrive, claiming they have business with the former soldier. Jason and Dahlia run into a church, but aren't safe for long. A group of creatures descends on the two from the church ceiling. Before they can harm Jason, Dahlia undergoes a hellish transformation and orders the creatures to bow before her. She then gives Jason her heart, physically, and tells him it will keep him safe. She then tosses him out of the church as the walls seem to close in around her.

Aaron and Jason's former unit await him outside and question what Dahlia had given the soldier. He tells them simply "Her heart. She gave me her heart." Things next cut to Jason and Dahlia standing atop a ridge, with the singer saying Jason had kept it. She then asks about his conversation with his old friend. As it turns out, Aaron was meant to be the one to survive the attack on their unit. Apparently, it had been a planned attack. However, Aaron convinced those in charge to spare Jason, as he would be a much better poster boy. In reality, Aaron, and the unit as a whole, just wanted Jason to live. They felt he was worth more than all of them, ten of each of them even.

Jason, however, is unsure he knows how to live, to which Dahlia replies "That makes two of us, soldier boy. But let's give it a try".

Among the Damned received mostly negative reviews from fans and critics. While some readers praised the art and monster designs, many felt the story was hard to follow.

Internet comedian Lewis "Linkara" Lovhaug reviewed Among the Damned on his webshow "Atop the Fourth Wall" – a show dedicated to making fun of bad comics.

Retrieved from "https://silenthill.fandom.com/wiki/Among_the_Damned?oldid=200065"
Community content is available under CC-BY-SA unless otherwise noted.