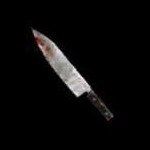 Before "handing" it to James, Angela is holding the knife while lying on the floor, seemingly contemplating suicide. This event occurs in Room 109 of Blue Creek Apartments.

Upon examining the item, James notices that "the blade is stained with something red": blood. According to the novelization, the knife is the same one that Angela used to kill her father, Thomas Orosco, by slitting his throat. Angela also used the knife to kill her brother.

While it can't be used as a weapon, examining the knife from the inventory menu will increase the chances of getting the "In Water" ending.

Angela screams "No!" when James attempts to take the knife.

Angela puts the knife on the table before leaving the room.
Community content is available under CC-BY-SA unless otherwise noted.
Advertisement