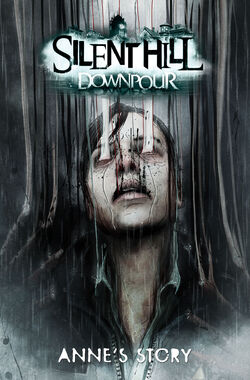 Anne's Story is a Silent Hill comic published by IDW Publishing. It is written by Tom Waltz and illustrated by Tristan Jones.

In 2015, it was re-released physically as part of the Silent Hill Omnibus Volume 2, along with Sinner's Reward and Past Life.

Anne's Story, Issue 1 — The comic starts with the scene where Murphy Pendleton and Anne Cunningham exchange words for the first time across a canyon in the mountain side, not too far from the prison transfer bus that crashed. Anne’s journey begins as soon as she falls to what Murphy thought was her death and down a rabbit hole made of her own nightmares.

Anne's Story, Issue 2 — The comic begins after Anne meets up with Murphy for the second time in Devil's Pit and follows Anne until she meets Howard Blackwood.

Anne's Story, Issue 3 — In this issue, Anne relives her dark memories in her journey through the town of Silent Hill. This issue also reveals the fate of Anne and DJ Ricks in the radio station.

Anne's Story, Issue 4 — The finale of the comic. Anne discovers the truth about her father's attack and comes to terms with her own demons.

Anne's Story received mostly good reviews from fans and critics. Many praised the story for its ability to both fill in details relating to Downpour while also standing independently, though mild criticism was directed at the art and what many considered a weaker second half.

Retrieved from "https://silenthill.fandom.com/wiki/Anne%27s_Story?oldid=200074"
Community content is available under CC-BY-SA unless otherwise noted.