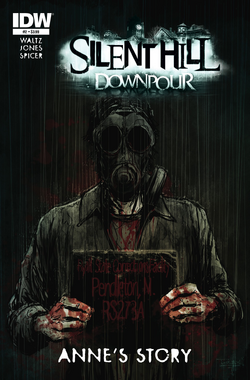 Anne's Story, Issue 2 is the second issue for Silent Hill comic Anne's Story published by IDW Publishing. It is written by Tom Waltz and illustrated by Tristan Jones.

In this issue of Anne's journey through Silent Hill, Anne encounters Murphy for the second time in Devil's Pit.

As Anne finds Murphy Pendleton wandering around Devil's Pit, she confronts him and finds a police badge, complete with a mourning band, in his clothes which reminds her of her father, Frank Coleridge. He denies knowledge of it, but she doesn’t believe. As she tries to shoot him, she resists the urge due to a flashback of her father during training, sits on the ground, and asks him to leave her alone.

As he leaves, Anne, still on the ground, has a flashback to when she was arguing with her husband, Mark Cunningham about whether or not Anne could care for her father who was in a vegetative state. He suggests that Frank should be placed in a nursing home. She rejects the idea and replies that she could take care of him. They argue over the subject, and Mark brings up how her father’s injury is taking a toll on their marriage as well.

After the flashback, she sees her "dad", who is the Wheelman, the manifestation of her father's memories, together with a Nurse. Anne loudly demands the figure to identify itself and yells about how she is capable of taking care of her father without help. As Anne approaches them, she realizes what the creature is, and the Nurse stabs at her.

She experiences another flashback, about the moment before she was hired to Ryall State Prison. However, the Warden, wanted to have a sexual affair with her, which she vehemently refused. The Warden implies that he can get her the job transfer to be at Murphy’s prison if she complies with his advances. He also subtly threatens her to not tell anyone, as it would be “your word against mine.”

As she "awakens" from the flashbacks, her vision becomes horrific as Devil's Pit shifts into the Otherworld. Behind her is a monster that probably represents the Warden's (Leonard B. Trent) sexual nature. The monster has a large phallic appendage sticking out, and he repeats phrases, like “mutual gain” and “tit for a tat,” from Trent’s proposal. He “reminds” Anne of “all those sick things we did together” in reference to their affair. He also repeatedly calls Anne “little girl,” symbolizing her daughter lay love for her father as well as the more sexual undertones the phrase carries today. She runs away from the monster and again, approaches the Wheelman, where she tells "him" that she was good and sobs while lying on the floor. At that time, the world instantly shifts back to the Fog World and what shocks her is Howard Blackwood who was now suddenly beside her.

As she looks around, she is confused as to where she is. Howard informs her that she is now in the town of Silent Hill. Howard tells her that he knew about the bus crash because Murphy told him. He also tells her that people have been playing song dedications for Murphy from the radio station in the “big ol’ buildin’ with a clock on the top”, and to be cautious about the "rain" which was about to come. Before Anne could ask him further, he disappears.

Anne then heads to the radio station, foreshadowing her third encounter with Murphy, together with Bobby Ricks.

Add a photo to this gallery
Retrieved from "https://silenthill.fandom.com/wiki/Anne%27s_Story,_Issue_2?oldid=199918"
Community content is available under CC-BY-SA unless otherwise noted.