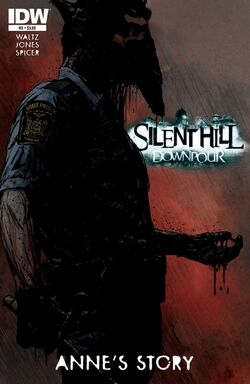 Anne's Story, Issue 3 is the third issue for the Silent Hill comic Anne's Story published by IDW Publishing. It is written by Tom Waltz and illustrated by Tristan Jones.

In this issue of Anne's journey through Silent Hill, Anne relives her dark memories. It also reveals the fate of Anne and DJ Ricks after their sudden disappearance at the radio station.

Anne, now in front of a thrift shop, hears the voice of DJ Ricks sending another "dedication" to Murphy Pendleton through a radio. He also wishes Murphy would meet him in person and “find out what his secret is.”

She then experiences a flashback to her wedding. Her father says that “Mrs. Anne Marie Cunningham” is “gonna take some getting used to,” before she assures him that she will always be his “Annie Coleridge.”

The flashback then moves to her father and husband talking about Anne’s work at Wayside. Mark ironically calls the Warden Leonard B. Trent “a straight shooter.” The scene moves to a conversation between Anne and the Warden, seemingly post-coital. The Warden says Mark “doesn‘t know what he’s missing,” that he’s sorry her father passed but that it was “probably for the better” due to his vegative state, and that Warden Milton at Ryall would sign off on Pendleton’s transfer papers. He again references “mutual gain.”

Following, Mark and Anne stand over Frank’s grave. He says he and the whole prison know about her “dirty, little secret,” referencing the affair. He says he’s “done,” and tells her that it won’t bring her father back. Back to the present, Anne protests, saying “he’s wrong, Daddy,” and that she “can fix this.”

Over the radio, DJ Ricks reveals that he knows a way out of town. Anne is surprised, and then is attacked by a Doll that jumps out of the thrift shop's front window. The Doll taunts her with references to wedding vows, calling her a “slut,” and saying that God “hears,” “remembers,” and “punishes.” Anne grabs a broken shard of glass and kills the monster, revealing a Prisoner Minion behind the Doll. The Minion say it’s just it and her now, “until death do us part.” Anne then grabs a baseball bat, angrily beating the monster’s head until it dies. Throughout the attack, Anne is haunted by the words of Warden Trent.

She experiences another flashback, when George Sewell calls her to tell her that he got Murphy  on a transfer to Maximum Wayside Prison in two weeks. Her anger elevates as she hears the name Murphy, as she wants revenge on his actions towards her father.

As the rain starts, Anne hears another broadcast from a radio, but this time, from a car, where DJ Ricks wants help and will be waiting at the radio station. Suddenly, a bloody corpse of a bull drops from the car. The manifestation of her father's memories are suddenly behind her. Anne, with shock asks her father who killed this animal. However, an unknown monster resembling Incubus stabs her with its horns.

Meanwhile, Anne and DJ Ricks find themselves in a large hanging cage, in front of the clock of the Centennial Building, with an unknown shadow on it.

Add a photo to this gallery
Retrieved from "https://silenthill.fandom.com/wiki/Anne%27s_Story,_Issue_3?oldid=201729"
Community content is available under CC-BY-SA unless otherwise noted.