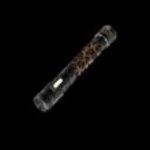 The Beam Saber is a weapon found in Silent Hill 3 and is the melee counterpart of the Flamethrower. It also appears in Silent Hill: Book of Memories.

After beating the game once and using mostly melee weapons to kill monsters, Heather Mason will unlock the Beam Saber. It can be found on a door (as the doorknob) in the 2F north corridor of Central Square Shopping Center. It works like other battery weapons, and after receiving a 10 Star Ranking, its length will double.

After receiving the Beam Saber, the Flamethrower will automatically be unlocked after beating the game a second time.

The length of the Beam Saber after earning a 10 star rank.

A figurine of Heather with the Beam Saber.
Español Italiano Русский
Community content is available under CC-BY-SA unless otherwise noted.
Advertisement