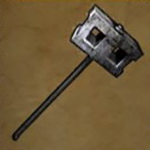 The Bogeyman's Hammer is a weapon that is wielded by the Bogeyman in Silent Hill: Downpour. It is a large sledgehammer that resembles a gavel, used by a judge in a court of law.

In Downpour, the hammer is wielded by the giant and foreboding Bogeyman. The Bogeyman uses this lethal weapon to swing at Murphy Pendleton and kill him almost instantaneously. The Bogeyman always appears with his hammer, and it is his signature weapon.

In a cutscene during his confrontation with the Bogeyman, Murphy uses the hammer to land the finishing blow on the monster.

At the end of the game, Murphy Pendleton transforms into the Bogeyman, being the first ever person to do so canonically. As the Bogeyman, he can swing the hammer in wide arcs that devastates enemies, killing Prisoner Juggernauts with one swing and killing Anne Marie Cunningham in two. Unlike other weapons in the game, the hammer is indestructible. It is one of the five weapons the player must use to complete the game, along with the plank, ladder hook, knife, and fire axe.

The Bogeyman's Hammer appears in Silent Hill: Book of Memories as a weapon.

Murphy with the Hammer.

The model in Downpour.

The model in Downpour.

The Hammer in Book of Memories.
Add a photo to this gallery
Retrieved from "https://silenthill.fandom.com/wiki/Bogeyman%27s_Hammer?oldid=192995"
Community content is available under CC-BY-SA unless otherwise noted.