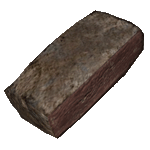 The Brick is a weapon in Silent Hill: Downpour. Murphy Pendleton can find these in rubble piles throughout the streets of Silent Hill, and require him to be directly next to an enemy in order to hit them. They are most effective as projectile weapons, especially to knock the Weeping Bats from ceilings.

Murphy is able to obtain an infinite number of bricks from rubble piles, allowing him to hold out at the location and barrage his enemies with missile attacks, similar to the rock. However, on Normal or Hard difficulty, this takes a considerable amount of time and running away is preferable.

Retrieved from "https://silenthill.fandom.com/wiki/Brick?oldid=163889"
Community content is available under CC-BY-SA unless otherwise noted.