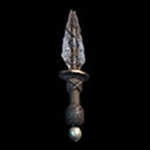 Its placement, decoration, and usage makes it apparent that the dagger was used in the town's secret ritual and by the town's founding families.

The Ceremonial Dagger holds an importance as the only weapon in the game that can be used as a key to unlock doors and mechanisms, such as the mechanism used in the Church Organ Puzzle. Alex uses the dagger as a key by holding the blade parallel to the ground, inserting it into the keyhole of the door, and twisting the blade. This mechanism found on the door of Adam Shepherd's hunting room also insinuates that he used the knife before Alex's arrival and may have been charged with keeping it.

Retrieved from "https://silenthill.fandom.com/wiki/Ceremonial_Dagger?oldid=164214"
Community content is available under CC-BY-SA unless otherwise noted.