Cynthia Velasquez is a character in Silent Hill 4: The Room. A flirtatious Spanish American woman, Cynthia becomes trapped in Walter Sullivan's Subway Otherworld. She is later murdered as the 16th Sacrament, "Temptation".

Cynthia is first seen through the window in Room 302, standing near the subway entrance. Henry Townshend soon finds Cynthia in the Subway world, South Ashfield Station. She is convinced that she had become trapped in a terrible dream. After admitting her fear of the place, she asks Henry to help her find a way out of the station, stating that she will repay him with a "special favor", which is implied to be sexual. During the escort, she becomes nauseous and rushes into the women's restroom and disappears.

After Henry returns, he discovers her locked in a subway car and reunites with her. Later, Cynthia manages to find an exit from the station and calls Henry over the public address system, but she suddenly screams as Walter Sullivan attacks her.

By the time Henry reaches her, Cynthia is already dying. She is covered in blood with "16/21" carved into her left breast. Henry cradles Cynthia in his arms and she then apologizes to him for not being able to give him his special favor. Henry comforts her by telling her that it is just a dream and she dies in his arms. Her items left behind are her make-up items that are found scattered around the floor near the crime scene.

When Henry returns to the subway station later in the game, Cynthia has become victim 16 of the 21 Sacraments. She now comes after Henry as the other victims do. She slithers on the ground when being attacked and impales Henry with her bare hands to grab his heart. In the Subway World, she appears at the turnstiles, the Lynch Street Line platform, the men's bathroom, and the King Street Line Platform. If she isn't pinned down in the Subway World with a Sword of Obedience, she will appear in the Building World in Garland's, the alleyway with restaurants, and the room with the numerous locked doors. She will also haunt Room 203 in Apartment World.

Cynthia Velasquez was a girl of Spanish-American heritage. She met "him" in the South Ashfield Station, near South Ashfield Heights. At that time she was 13 years old and a junior-high school student. She was so beautiful.

She had seen him, "the man," in the subway station before. He was often seen hanging around. Sometimes he stayed there all night, with his worn out clothes and sleeping bag. Cynthia was always with her friends and, he, in his shabby appearance, often watched her from a distance.

But one day, he suddenly approached her, saying, "E-excuse...me..."
She was surprised by him.
He continued, saying, "W-which s-school are you going...?"
She was at loss for words but answered, "North Ashfield Junior-High School... what do you want from me?"
He continued, "Well, that apartment there... Room 302..."

Her friends interrupted, saying to Cynthia, "Who the hell is this piece of crap?"
"Leave him alone, let's go!"
"Don't be bothered by him," and they tried to pull her away from him.

But Cynthia said, "Well, you look handsome. Though... where are you from?"
He replied, "I came from Silent Hill..."
But her friends were still trying to distance themselves from him, "Don't talk to him. Leave him alone, okay?"
Her friends took her hands again and began pulling Cynthia away, but she stopped when he said, "Wait! Cynthia."

Surprised to hear her name, Cynthia turned back and came closer to him again. She put her right hand gently on his cheek and said, "Hey, you misunderstood me. You look handsome, but it doesn't mean I think you're attractive. Your clothes are filthy, and smell so bad. Do you think that's the kind of thing a girl like me is into? No way. And just how is it you know my name?" she asked.

He replied, "Ah... well, it has been about 10 years since I heard your name."
After hearing that, Cynthia quickly removed her hand from his cheek, "10 years? You've been eavesdropping on us for 10 years? You're disgusting!"
Cynthia and her friends walked quickly down the stairway to the subway platform.

"It's not my day. Just my luck to meet a creep like that. Oh well, I've got to do something for fun. I'm going to a night club," Cynthia declared to her friends.
"Not again, Cynthia. You'll get in trouble if they know about your age," said her friends.
"Don't worry, they won't notice if it's me," said Cynthia.

Cynthia in "Your Rain".

Cynthia in the Subway World.

Cynthia in the Subway World.

Cynthia's dance in her alternate costume.

Cynthia in the train.

Cynthia bleeds on the floor.

Cynthia singing in Your Rain.

Cynthia dancing in Your Rain.

Cynthia singing in her music video.

Cynthia with two other dancers in Your Rain.
Add a photo to this gallery 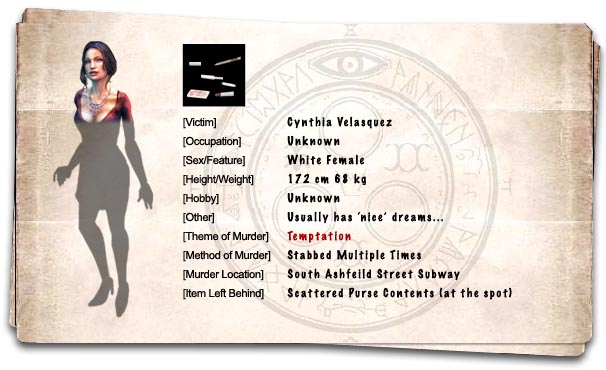 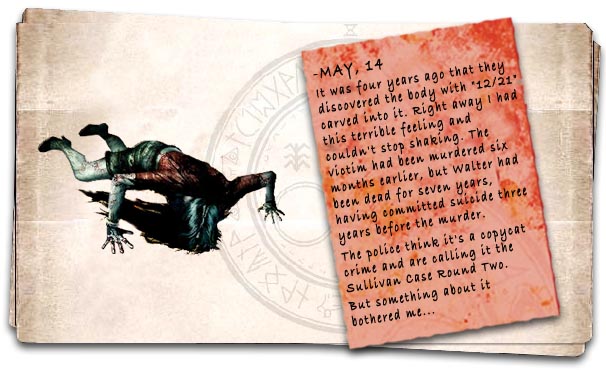 Retrieved from "https://silenthill.fandom.com/wiki/Cynthia_Velasquez?oldid=201924"
Community content is available under CC-BY-SA unless otherwise noted.