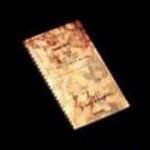 Harry's notebook
Description
"Dad wrote about my past in here. As always, this should be novelized."
Purpose
Informative reading
Location
Given automatically to Heather by Douglas Cartland after the boss battle with the Missionary.
Variants
None
Appearances
Silent Hill 3

Dad's Notebook is an important file received in Silent Hill 3. Unlike most other memos, the notebook is an actual item present in Heather Mason's inventory. The notebook bears the title Simple Works and has the words "To My Dear Daughter..." written on the cover in Harry Mason's handwriting. It appears as an aged document with bloodstains running up the length of the cover.

Heather receives the notebook from Douglas Cartland, who found it in Heather's home. He says Harry was holding it when he was murdered by the Missionary. During Heather and Douglas' car drive to Silent Hill, she explains the contents of the notebook, which detail the events of the first Silent Hill game and what happened afterwards.

"I hope this will never come to
any use; maybe it's better if
you never know.
More than anything else, I fear
the possibility of your going
away, far from me.

But sometimes we have to
tell the truth.
That's why I'm writing this, before
I'm lost in death and oblivion.

What happened back then?
That has something to do
with who you are.

It all started 24 years ago. Coming
back from a vacation, my wife and
I found a baby on the side of the
highway. Since we were childless,
we thanked God for letting us meet
this child... this girl. We took her
home.

3 years later, my wife died, and
another 4 years later — 17 years
ago —, I came to Silent Hill.
I heard the girl's pleas and took
her with me, not knowing why
she wanted us to go there.

And it was there that the girl went
away. Not that she actually went
anywhere, nor did she die.
'Returned to her original self'...
that's what Dahlia Gillespie said.

'Original self'... That was the young
woman burned by her mother as a
sacrifice to God... Alessa Gillespie.

Half her soul escaped in those
flames and went on to live in a
baby... in that girl of mine. Of ours.

7 years passed before that half-a-girl
returned to Silent Hill and made
Alessa whole again. Newly
strengthened, she vowed to kill God.

God, a fetus nestled into this
sacrificial girl's womb, was
summoned with the usual rites.
This was Alessa's wish, no matter
what the outcome — even if her
own existence were at stake.

But that wish was not granted.
My interruption meant she prayed
instead for the girl's return.
I alone couldn't bring her back.

Dahlia did it — I only helped at the
birthing ceremony, to bring God out
of Alessa.

The newly-born God wailed
once and was dead.
All from that girl's — and probably
Alessa's — conscious resistance.

That's not the end.
After God had vanished in a glow
of light, Alessa reappeared and
gave me a baby.
She looked a lot like that girl so
long ago.

And then Alessa was gone, dead.
There was nothing I could have
done to help.
I simply clutched the baby to
my chest and ran off.

The whole thing felt like a dream,
but I had proof that it wasn't.
The girl was nowhere to be found,
and in my arms... the baby.

Now 17 years have passed.
It feels like only yesterday, and
again it feels like a million years ago.

I confess I had reservations at
first about raising that baby.
Could I love her?
Her existence was thoroughly
unexplainable.

I thought, 'She could be that young
woman who snatched away my
beloved daughter.' That led to
sadness, anger... there were times
when I put my hands around her
tiny little throat.

Several times I even considered
abandoning her.
That's what a terrible person I am.

But I decided to raise her after all.
I just couldn't seem to let her go.
When she... when you look at me,
you laugh, so...

Even now, I can't forget
about that girl.
But I love you. I have no doubts
about that. That's all I ask you
to believe.

To my precious daughter...
— Harry Mason"

Retrieved from "https://silenthill.fandom.com/wiki/Dad%27s_Notebook?oldid=199012"
Community content is available under CC-BY-SA unless otherwise noted.