View source
watch 02:59
Wiki Targeted (Games)
Do you like this video?
Play Sound

Dark Deception: Monsters & Mortals - Silent Hill is a downloadable chapter for the multiplayer horror party game Dark Deception: Monsters & Mortals by Glowstick Entertainment. It is a crossover with the Silent Hill series in which players take control of two of its protagonists and two antagonists competing for Soul Shards in the streets of Silent Hill, Maine. It was licensed by Konami Digital Entertainment and announced to be released in February 2021,[3][4][5] being quietly delayed to March 23 for reasons unknown.

The expansion pack was only given a limited release, with Glowstick Entertainment stating on March 19 that "It's highly unusual for a small indie team like [us] to obtain an IP as big as Silent Hill... This is a huge test for the Monsters & Mortals community. If the Silent Hill DLC sells well, DLC for other big AAA IP become a strong possibility."[6]

Dark Deception: Monsters & Mortals is a P2P multiplayer horror party game in which players take control of monsters or survivor characters. The two classes of characters are at odds with each other, competing for items known as Soul Shards.

The game uses covers of "Claw Finger", "Until Death", and "Don't Cry" composed by Daniel Dombrowski.[15][7] Glowstick Entertainment released them as standalone tracks in February and March 2021 respectively.[16][17][18] 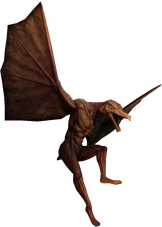 The Nurse uses her ability.

Swarmed by an Air Screamer.

Welcome to the Otherworld.

Do you feel remorseful?

Wrath of the Red Pyramid Thing.

Remains of the Judgment.

Community content is available under CC-BY-SA unless otherwise noted.
Advertisement