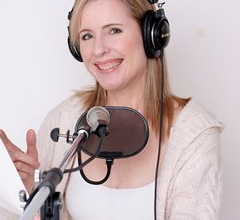 She has worked on other video games as well, and sings the theme songs in Metal Gear Solid: Peace Walker, Metal Gear Solid V: The Phantom Pain, Final Fantasy Crystal Chronicles, and Tokyo Ghoul, and she has released three solo albums.

Donna Burke was born in Perth, Australia. She lives with her husband, and guitarist, Bill Benfield and her three cats.

Formerly a high school English teacher in Perth, she gave up that pursuit and went on the path of singing and voice acting. Burke has had over 10 years of classical voice lessons, and does jazz, classical, techno, folk, and rock concerts. Because of this, she has been described in reviews as "one of the world's most versatile singers". Her last album entitled "Blue Nights" came out in 2005 and featured many of her original songs like "Don't I look Pretty" and "Quiet Night".

Donna doing mocap with Jeremy Blaustein during the burning staircase scene.
Add a photo to this gallery
Retrieved from "https://silenthill.fandom.com/wiki/Donna_Burke?oldid=193681"
Community content is available under CC-BY-SA unless otherwise noted.