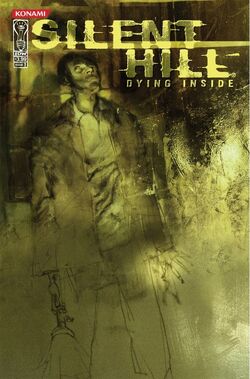 Dying Inside, Issue 1 is the first issue released by IDW Publishing in their series of comic books based on Konami's Silent Hill series.

Lynn DeAngelis is running through the streets of Silent Hill, with Christabella LaRoache and a cadre of monsters behind her. As Lynn stands with her back against a wall, Christabella has Lynn in a bad position, with monsters ready to pounce the girl. Before the monsters can attack, when a figure appears and begins to fire a shotgun at the monsters. The man is able to deter Christabella from causing further harm. Unimpressed, Christabella begins to fade, telling Lynn that she's beyond saving, though is too stupid to know it. The scene fades to Lynn lying in a padded psychiatric cell.

Troy Abernathy, a former psychologist, attends a book signing. A woman steps forward to have Abernathy sign her copy of his latest book, explaining that the book turned her life around as he does so. Before reading his book, she says, she was a heavy drinker and would have a different guy each night. Embarrassed, the woman waves the conversation off and takes back the signed book. The inside flap has the message "You're beautiful" and Troy's hotel address and room number.

Waking the next day and feeling unfulfilled with his life as an author, Troy visits Phil, an old friend, who is in need of the author's psychiatric expertise. A patient who has been in Phil's care for more than a year has failed to respond to all attempted treatments. Phil is relying on Troy's innate ability to connect to any patient as the key to curing the girl. The patient, Lynn DeAngelis, had traveled to Silent Hill a year-and-a-half ago to film some footage of the town, and upon her return, began suffering from delusions and bouts of schizophrenic paranoia.

Undertaking the case, Abernathy has the same results as Phil; nothing is working. Troy assumes temporary custody of his patient and returns with her to Silent Hill, the scene of her traumatic experience. Once there, Troy begins to experience bizarre visions of his late wife. Fleeing the vision, Troy starts seeing monstrous creatures, who take notice of Lynn and himself. Grabbing hold of Lynn, Troy runs into a nearby diner for shelter.

Christabella is sitting inside the diner and Lynn, who's condition has dramatically improved, remembers the girl. Christabella also recognizes Lynn, but is less than happy to see her. Telling Lynn she's brought the wrong person with her to Silent Hill, Christabella believes the girl needs to be punished. As mouths, attached to tentacle-like stalks, begin to blossom around Christabella, Troy sits terrified nearby.

Retrieved from "https://silenthill.fandom.com/wiki/Dying_Inside,_Issue_1?oldid=152473"
Community content is available under CC-BY-SA unless otherwise noted.