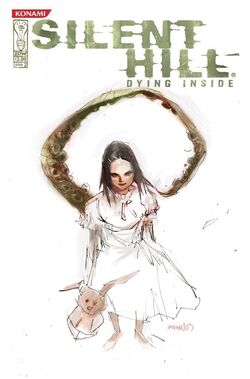 Dying Inside, Issue 2 is the second part of IDW's Dying Inside miniseries. Issue 2 continues the story of Troy Abernathy and his patient Lynn DeAngelis as the pair attempts to escape the dark streets of Silent Hill and the malevolent force of Christabella LaRoache.

Recognizing the girl in white, Lynn decides to simply walk out of Silent Hill and leave the abandoned town behind. Christabella finds this hilarious. She has no intention of allowing Lynn to escape and sends a tentacled mouth to attack Lynn. She then berates Lynn, asking how she made it through the real world as long as she did. The mouths continue to nip at Lynn, all while Christabella reprimands her for returning with Abernathy, who she sees as unfit for her purposes.

Growing bored with the situation, and disappointed that the footage Lynn shot has disappeared, Christabella orders the mouths to kill her when a man enters the room and begins to fire a shotgun at the mouths. Troy recognizes the man immediately as Brett, his late wife's ex-husband. Brett tosses Troy a pistol, but Lynn intercepts it. She fires a bullet into Christabella's eye, though it does little except leave the her with a hole in her face and her hair aflame. The trio waste no time in shooting their way out of the diner and onto the streets of Silent Hill.

Troy doesn't understand why Brett is helping him. Brett is equally confused, not understanding why Troy is unsettled by his offer of help. At this point, however, both Lynn and Troy notice the back of Brett's skull is missing, a detail the man seems unaware of. He simply continues the conversation, telling Abernathy he'll be there to back him up, just as Troy was there for Brett. Brett attempts to introduce himself to Lynn, but Abernathy refuses to allow it, punching Brett in the face and knocking him down, stealing his pistol and ammo in the process. Abernathy and Lynn flee from Brett, who is dumbfounded by Troy's attitude.

As the pair runs, Lynn questions Troy about Brett's identity and Troy's reason for bringing her back to Silent Hill. Troy explains Brett's relationship with his wife and that he brought Lynn back to Silent Hill to try and help her. Having sought refuge inside of a clothing store, the pair are surprised by the manifestation of Abernathy's dead wife, Julianna. Trying on lingerie, Julianna commends Troy for his helpful attitude, saying it would make any wife proud. She then berates him for being unsatisfied with his life and all the trappings it brought him. She asks him what it is he really wants, if it's acceptance from his dead wife he seeks. She tells him everything is okay, proceeding to attack him with the scalpel she used to kill herself with.

Lynn tries to help Troy and bashes Julianna in the head with a pipe, though it appears to have little effect. As Julianna sits in front of the pair, hunched over from the blow, Troy asks about her suicide and what compelled her to do it. Not addressing the question, Julianna asks about Troy's previous encounter with Brett, asking if Brett's head had been bothering him. She explains that Troy jumped Brett from behind and killed him. Refusing to listen anymore, Troy walks away and drags Lynn with him.

Lynn refuses to travel with a murderer, but Troy's patience has reached its limit and he slaps her, which he regrets immediately. Lynn calls him a monster, and he tries to walk away, but the pair stands surrounded by monsters. The pair stay together a while longer, fighting their way to a footbridge leading out of Silent Hill. The bridge, however, is incomplete and Christabella, with Brett in tow, blocks their way forward. The manifestation of Brett was supposed to have been under Christabella's control from the start, she explains, but got away from her. Having corrected that imbalance, Brett transforms and begins to attack Lynn and Troy. Their weapons, gifts from Brett, are now useless. As the monstrous Brett begins to attack Lynn, Troy offers himself into Christabella's services, in exchange for Lynn's safety. Christabella explains she already has him at her mercy, but Troy explains that, as a psychiatrist, he holds in his mind the sins, dreams, and nightmares of hundreds of people. Hearing this, Christabella accepts the deal with no hesitation and allows Lynn to leave. Outside of town, Lynn is able to hitch a ride away from Silent Hill. Back in town, Christabella looks to the sky and tells Troy she can feel people watching. She advises him to smile for the camera while he still has a face.

The scene pans out into a TV screen, with Raymond Foch, his brother Oliver, his girlfriend Lauryn and their friend Hogg all watching; the group was reviewing the footage Lynn shot in Silent Hill, which Raymond stole when he was employed at the hospital she was committed to. He wanted to show his friends the tape, because its contents was slowly changing and he wanted to be sure they saw what he did. Lauryn decides the group should head to Silent Hill and investigate things for themselves.

Retrieved from "https://silenthill.fandom.com/wiki/Dying_Inside,_Issue_2?oldid=152474"
Community content is available under CC-BY-SA unless otherwise noted.