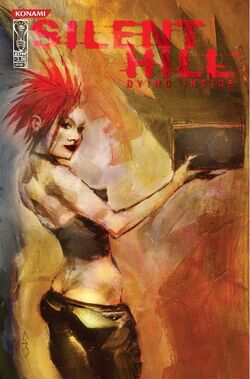 Dying Inside, Issue 3 is the third release by IDW for their Silent Hill comic series. It continues the tale begun in Issue 1. Lauryn LaRoache, having found the footage shot by Lynn DeAngelis, arrives in Silent Hill with a group of friends. As they explore the town, they are confronted by Christabella LaRoache, Lauryn's sister, who has been dead for five years.

Lauryn LaRoache and her friends are standing around a dilapidated playground, viewing the footage shot of Silent Hill by Lynn DeAngelis, which Raymond Foch (known as Clown) had stolen from the hospital the girl was committed to when he was employed there. Lauryn stands relatively unimpressed by the theatrics present on the tape, but is confident that their journey won't be a waste. Scrawled all about the town are snippets of graffiti, which Lauryn, with help from a book she bought off of the internet, is sure will bring them untold fortune. Their plan, explains Clown, is to copy the writings in the town and append them to incomplete passages in the book Lauryn has, and sell them to superstitious multi-millionaires.

As he explains the plan, Clown loses his footing on a slide ladder and falls. A member of the group Lauryn has brought with her begins to heckle Clown over his clumsiness, which causes a heavy-set young man named Hogg to jump to Clown's defense by nailing the offender in his stomach. The altercation is broken up, and the ostracized youth heads off on his own. As he walks the streets of Silent Hill, Christabella finds him and, with the aid of several creatures, kills him.

After the boy's death, Lauryn enters into a hallucination. Seated at a large desk, A man cast in shadow holds a file, containing information on Lauryn. Seated across from the stranger, Lauryn is forced to sit and listen to the man as he begins reveal some of Lauryn's darker secrets, such as her feeling of responsibility for the murder of her sister. She tries to leave, but the man stops her, saying she really shouldn't have made the trip to Silent Hill. He offers an analysis of her personality, calling her a skeptic of the afterlife. The man, too, felt that way. He only wishes to help Lauryn, and shows her what he truly is, and what she may become. A he finishes speaking, massive tentacles begin to sprout from his chest, and start to engulf the girl. Before any harm comes to her, she finds the hallucination broken, and she is standing in a shopping center.

As she regains her senses, Oliver Foch (known as Payne), grabs hold of her, asking if she's alright. She tells him she's just seeing things that aren't there, a notion he offers little advice on. Knowing Lauryn's alright, he begins to press her about another matter; the pair are seeing each other in an intimate manner, but Lauryn is dating Payne's brother, Clown. He wants to know if she's told Clown about them yet, to which she replies her and Payne's relationship was never meant to be serious. Before she can say anything more, Clown interrupts, yelling that he's found something. The group, smaller now that the original group had broken into four teams, gathers around an old phonograph, which begins playing classic country music, a favorite of Lauryn's. Lauryn shows Clown her appreciation, while Payne looks on, troubled.

As they listen, Hogg grabs a chainsaw and begins to play around with it. As he does so, monsters begin to crash through the glass ceiling of the shopping center. Forced to defend themselves, Clown grabs a knife, while Payne begins to employ a pitchfork against the creatures. Hogg is able to create a safezone around the group with his chainsaw, while Lauryn attempts to use a spell from her book, but is unable to do so before she is carried away by a creature.

Though Lauryn is gone, the remaining three are able to fight their way free of the shopping center, and into the presence of Christabella and more monsters. Christabella informs the men that they won't be going anywhere, and the rest of their friends stand in similar situations. Christabella begins to deliver a speech to Clown and his friends, but is interrupted by a book smacking her in the head. Turning, Christabella looks to Lauryn and offers a welcome to her big sister.

Retrieved from "https://silenthill.fandom.com/wiki/Dying_Inside,_Issue_3?oldid=170756"
Community content is available under CC-BY-SA unless otherwise noted.