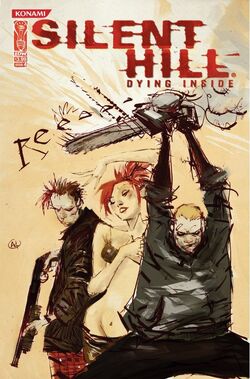 Dying Inside, Issue 4 is the fourth issue of IDW's Silent Hill-based miniseries Dying Inside. Issue 4 continues the tale of Lauryn's attempt at defeating the remnant of her dead sister, Christabella, who has become empowered by the darkness surrounding Silent Hill.

Lauryn, having made her way back to her group of friends, stands before Christabella with her black book in hand. As the girl begins to recite passages from the book, Christabella bursts into flames. Yelling and cursing her sister, Christabella doesn't maintain the charade for long, revealing that Lauryn's attempt at destroying her had failed. Christabella explains that she's been in Silent Hill too long for such a spell to effect her. Lauryn refuses to remain in her sister's presence any longer and orders her friends to run. As they run, Christabella only laughs, telling her sister that she can run, but she has little choice but to fulfill her role in Christabella's plan, but since they are family, Lauryn is given a five minute head start.

As Lauryn and her party flee Christabella's wrath, another group fights off creatures in Silent Hill's subway system. Succeeding in dragging a morbidly obese monster to its death, the remaining survivors begin to celebrate, when Troy Abernathy, now enthralled to Christabella, makes himself known. He kills a girl, apologizing as he does so. He explains to the final survivor that, in his position as a servant of Christabella's, Troy needs to choose his battles carefully. Abernathy then advises his victim to hold still, because he's about to experience a great deal of pain.

Believing they've lost Christabella, Lauryn, Clown, Payne, and Hogg take a few minutes to catch their breaths and brainstorm a plan. During the conflict with Lauryn's sister, Payne suffered a wound to his leg, having to rely on Hogg to move about, while Clown questions Lauryn on her relation to the girl tormenting them. Lauryn claims to be as confused about the situation as Clown, but Hogg is distraught over the lost monetary opportunity. Lauryn tells Hogg to drop the subject, and the group of friends head into a sporting goods store. As Clown and Hogg load up on weapons, Payne pulls Lauryn aside, and informs her that Clown may know about their relationship. Rather than pay him heed, Lauryn issues a rally call, telling everyone it's time for them to move forward.

As they exit the store, Lauryn attempts to reach her friends in the subway on their cellphones. Dr. Abernathy is the one to answer the call, however. He tells Lauryn a trip to the subway station would be a waste, but if she insists on the journey, a mop and shovel would be good tools to bring with. He does, however, assure the girl that her friends at Midwich Elementary School and Silent Hill's lighthouse may still have a chance at survival. He also informs Lauryn that she'll face a difficult choice ahead of her, and if she'd like to schedule an appointment to speak, she'd be welcome to. Rather than listen to the doctor further, Lauryn throws her phone at the concrete in frustration.

As she does so, two boys manifest before Lauryn and she is drawn into a flashback. She finds herself standing in the bustling streets of Silent Hill with Christabella at her side and two boys before her claiming to be friends of Christabella's. They try to coax the younger girl into following them to their mother, with whom they claim to be engaged in an argument with. Lauryn, viewing herself as a thirteen year-old again, tells her sister to go ahead, as having the girl gone will make it easier to speak to a boy she has a crush on. Christabella walks off with the boys and is never seen again. Shortly after, she was abducted by unknown assailants and gruesomely murdered, as were the two boys.

Lauryn is able to break free of the illusion and kill the manifestation of the two boys, with help from Hogg and his chainsaw. Exiting the shopping center, Hogg hops on a motorcycle and decides to investigate the lighthouse, while Clown orders Payne and Lauryn to climb into a car with him so they can check out Midwich Elementary. Lauryn tries to convince the group to stay together, but Clown has no further patience and demands an reason for why they shouldn't split up. When Lauryn offers none, the friends part ways.

As Clown and his crew make their way to the school, they fall under the attack of a large, winged creature. The creature lands on the roof of the car and tries to get in, but Payne fires a shotgun into the roof and hits the creature. The creature, however, is undeterred and tries to attack the teens through the windshield of the car. Seeing no other option, Lauryn rams the car into a tree, killing the creature. As she steps out of the wreckage, Lauryn sees the brothers are still alive, though unconscious. At that moment, Christabella materializes behind her sister. Lauryn asks the girl if she's really her sister, to which Christabella only replies "kind of". Still searching for understanding, Lauryn asks why all of these things have befallen her, and Christabella begins to rattle off a series of rules, though to what they apply to is not explicitly stated.

Christabella tells her sister that their goal lies in a nearby hospital, but Lauryn reaches into a backpack and pulls out her book of spells. Christabella is initially unimpressed, expecting the same sort of spellwork out of Lauryn. However, before arriving in Silent Hill, Lauryn had placed an enchantment on all of her friends, allowing her to raise them as zombie slaves in the event of their deaths. With only a few words, numerous thralls begin to materialize around Lauryn. As she stands among her servants, Lauryn advises Christabella to refrain from killing anymore of her friends, since doing so would only add to her undead army.

Retrieved from "https://silenthill.fandom.com/wiki/Dying_Inside,_Issue_4?oldid=152476"
Community content is available under CC-BY-SA unless otherwise noted.