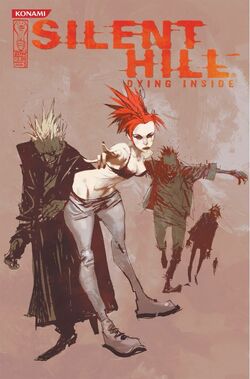 Dying Inside, Issue 5 was released by IDW Publishing and concludes the tale begun in Dying Inside, Issue 1. Lauryn LaRoache's confrontation with Christabella LaRoache reaches its climax, and the mysterious entity known as Whately makes his first appearance in the comics universe.

Lauryn orders her thralls to rip Christabella's monsters apart, much to the younger girl's horror. As her thralls continue to massacre Christabella's monsters, Lauryn mentally recaps the situation that brought her to Silent Hill in the first place. While she does so, Clown and Payne begin to regain consciousness and grow horrified at the scene before them. Before the brothers can even move, more monsters begin to descend on them, causing Lauryn to lose focus on the battle with her sister. Fearing for Clown and Payne, Lauryn grabs Christabella by the hair and demands she call the monsters off. The monsters, however, don't belong to her.

Lauryn orders her thralls to protect Clown and Payne, but Christabella's monsters refuse to let the thralls pass. Christabella uses the boys as leverage against her, blackmailing her into her services. Angry but seeing no other choice, Lauryn agrees and Christabella orders her monsters to dispatch of the interloping creatures. It is at this point that Christabella reveals the true reason for luring Lauryn back to Silent Hill. Christabella is locked in a struggle for control of the town, and Lauryn will help her tip the scales in her favor. If she does so, Christabella will allow Payne and Clown to live.

Hogg, having reached Silent Hill's lighthouse, rushes to the top of the structure, only to find his friends dead. Standing among the corpses is Troy Abernathy, though he assures Hogg that he had no hand in their deaths. Hogg is still cautious, however, and readies his shotgun as he asks Abernathy if they were going to be fighting; Abernathy, however, has other things in mind.

Lauryn, following Christabella's orders, explores the depths of Brookhaven Hospital with her thralls, searching for the individual with whom Christabella competes with for control of Silent Hill. As they walk, Lauryn's friends try to reassure her that they don't mind being undead and that they even enjoy their newly gained strengths. One, however, claims that the remnants of those who've been born and died in Silent Hill are in their minds, laughing. In anger, the thrall punches a brick wall, revealing a room beyond. In this room, Lauryn comes upon a sealed door and a pair eight-digit numbers, which she calls an equation of some kind. As she works on solving the puzzle, a symbol begins to form on the floor beneath Lauryn's thralls. Lauryn notices too late, and is unable to warn her friends before they burst into flames. From out of the carnage steps Whately, the man responsible Silent Hill's current state.

Payne and Clown remain in the wreckage of their vehicle, talking to one another. Payne begins to apologize for seeing Lauryn on the side, but Clown cuts him off, saying he isn't angry because now the situation has evolved beyond either of them. Payne attempts to defend himself, saying but Clown quips back that she never told him. Payne, still defensive, says that Lauryn may say it to Clown, but she doesn't mean it, and Clown agrees, because Lauryn is dying inside. Clown says the girl is unable to stand both men loving her, but she doesn't want to hurt either of them, just herself. At that moment, Christabella rips the hood off of what is left of the car, and asks Payne and Clown to be of assistance to her. She has a wayward servant that she wants to teach a lesson to.

Events shift to Brookhaven, and Whately passes judgement on Lauryn for Christabella's behavior. Before the girl can make use of her black book, Whately uses his magical prowess and ignites the book as Lauryn holds it. As Whately prepares to level punishment against Lauryn, Dr. Abernathy and Hogg arrive and are prepared to defend the young woman. Troy offers witty banter to the enigmatic Whately and offers Hogg the opportunity to deal with Whately. Whately begins to grow indignant in the face of his present situation, but Hogg shoots him in the stomach with his shotgun before the man can react.

As Whately falls, a monster spawns from his corpse and hordes of the creatures begin to descend on Lauryn, Troy, and Hogg. Abernathy tasks Lauryn with opening the sealed door and awakening the patient inside, who is generating the darkness in Silent Hill, he also advises her to raise the remainder of her friends. As Lauryn prepares to open the door, Christabella appears and tries to strongarm Lauryn into helping her regain control of Abernathy so he can dispatch of the sleeping patient, giving Christabella complete control of Silent Hill. As leverage, Christabella displays Payne and Clown, suspended from the ceiling of the room they all stand in.

Lauryn loses control of herself and calls her sister a murdering psycho, who wants nothing but power and control; Christabella tells Lauryn that she is no different. This sparks a though in Lauryn, who is now able to control the forces at work in Silent Hill. The young woman banishes the monsters attacking her thralls, as well as her thralls. In doing so, the images of Clown and Payne vanish as well, having been illusions. With no monsters to follow her commands and her powers severely limited, Christabella is left in the care of Dr. Abernathy.

Clown and Payne find themselves standing outside of Silent Hill, with Lauryn standing before them. Clown is relieved to see her and tell her it's time for them to head home, but Lauryn insists she is home, and Hogg has decided to stay in Silent Hill as well. She pinches each boy’s cheek and heads back into town, leaving them on the outskirts, confused.

Lauryn now stands in the center of Silent Hill, saying that it exists as a quiet little place where time seems to have stopped and people are happy to greet you. The mists have begun to lift, and Lauryn can finally see the sun again. She gives an open invitation to visitors, saying she'll always be there, and Silent Hill is in for a beautiful day.

Retrieved from "https://silenthill.fandom.com/wiki/Dying_Inside,_Issue_5?oldid=152477"
Community content is available under CC-BY-SA unless otherwise noted.