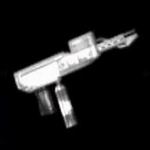 The flamethrower
Description
"This thing will roast the bad guys, and I don't have to worry about fuel, either."
Range
Medium
Strength
Medium
Location(s)
Helen's Bakery
Appearances
Silent Hill 3
Silent Hill: Book of Memories

After completing the game at least once and killing more monsters using firearms, the Flamethrower will be available for use in an Extra New Game. Heather Mason can find the Flamethrower on the counter of Helen's Bakery on the second floor of the Central Square Shopping Center.

The Flamethrower has infinite fuel, though its strength is initially weak. Its potency can be increased by obtaining a 10 Star Ranking. It is used much like the Submachine Gun, with Heather standing in place and aiming the direction of the flames.

The Flamethrower is a powerful ranged Expansion Pack weapon in Book of Memories.

The range of the flamethrower after earning a 10 Star Rank.

The flamethrower in Silent Hill: Book of Memories.
Add a photo to this gallery
Retrieved from "https://silenthill.fandom.com/wiki/Flamethrower?oldid=193066"
Community content is available under CC-BY-SA unless otherwise noted.