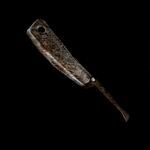 The Great Cleaver is a large meat cleaver that is wielded by the Butcher in Silent Hill: Origins. The weapon is dragged around similarly to how Pyramid Head carries the Great Knife; however, the weapon is not as rusted and not as large. It lets off a loud screeching noise as it is dragged. The blade is usually covered with a degree of blood from a previous kill. The Butcher himself wields the blade proficiently and does not slow down when using it; in fact, he swings it with great speed. In a cutscene after Travis Grady kills the Butcher, Travis wields the Great Cleaver with a cold rage in his eyes and brings it down upon the Butcher once in a powerful strike even after the Butcher was already lying on the floor, presumably dead; this act, paired with the fact that Travis will not take the Great Cleaver with him throughout the game, suggests his great disgust for the cruel monster and its tool.

After completing the game and obtaining the Bad ending, the Great Cleaver will be unlocked in Travis' inventory to play with. It has decent range and power similar to the Moon Gauntlets; however, its charged stab move is best for keeping a distance between Travis and his foe. Though the cleaver itself is large, Travis has no trouble wielding it and carries it as if it were a regular cleaver, although his stamina will be greatly depleted when he swings it. An enemy should go down after the first hit and die after two strikes.

Given that the Butcher is seen as a twisted representation of Travis himself, his strange ease of wielding the weapon could be a representation of how the two are more alike that he wants to realize. If it is to be believed that Travis truly was a serial killer in fugues, such a weapon would be natural to him indeed, and in Silent Hill, proficiency with such a weapon would be, too. Travis leaving the weapon behind and walking away could represent him leaving behind this part of his life behind and moving on without fear anymore.

In the Bad ending, the Great Cleaver's slash can be heard as someone is executed.

This weapon also appears in Silent Hill: Book of Memories. It is classified as a wildcard weapon and is capable of cleaving straight through most of the enemies' defenses. The only exception is the Butcher, who on top of nullifying the wildcard effect, takes little damage from it. It can be found in some zones, a reward in Valtiel's quest, or dropped by Butchers at random. It is often on the verge of breaking in the case of the third instance and needs to be repaired.

The Great Cleaver's appearance in the prototype version of Origins.