Henry Townshend is the protagonist of Silent Hill 4: The Room. In the beginning of the game, Henry has been suffering from recurring nightmares and finds himself locked in his apartment room, Room 302, of South Ashfield Heights. He is the last sacrament of the 21 Sacraments ritual and is given the title "Receiver of Wisdom".

As stated in the instruction booklet, Henry is a calm young man who "never lets his feelings show". Henry is quiet and introverted in personality, emphasized by the fact that he does not speak much and is more of a listener. No mention is made of any friends or family throughout the game, and even his neighbors only know him in passing. Henry also comments on his younger life as being "unsentimental". Henry's confrontation with Walter Sullivan forces him into a situation where he must change and leave the apartment, or die.

He is a keen and adept photographer, shown by the many scenic pictures on his apartment walls, which he shot himself. He has an eye for natural beauty that goes beyond the superficial as he once remarks, "This is a photo of the church I ran across while I was visiting Silent Hill. For some reason I was really attracted by the way it looked, so I took the picture." His desk has several books, a scrapbook and pen, and a leather portfolio. Henry mentions he always had a habit of collecting scraps of information, organized in this scrapbook, containing various magazines, books, and newspaper clippings.

Henry makes several comments about visiting Old Silent Hill multiple times as both a child and adult before moving into the room, so he has acquired a large collection of photographs; they serve as reminders of past Silent Hill games. A large picture of Toluca Lake is mounted in his living room, a gift from Frank Sunderland. Two in particular depict the Balkan Church and the old lighthouse, both landmarks of Silent Hill. Henry even makes a comment about the lighthouse picture saying that "there was even a rumor that a UFO came flying right by the lighthouse". This is a subtle reference to the UFO endings of the three previous games.

A car magazine on his coffee table titled Bikkuri Car suggests that Henry may be interested in cars. Henry is also a collector of books, mainly "cheap novels", yet for the two years he has been living in South Ashfield, he has not read any of them or even touched them.

Compared to many other Silent Hill protagonists, Henry isn't a reincarnation of a spiritual manifestation and he doesn't have a tragic backstory rife with guilt or repressed memories. Up until the game, Henry has had a comfortable and relatively happy life. Unlike all other protagonists of the Silent Hill series, Henry finds himself entangled in the terrors of the town not due to any past sin or an unknown supernatural affair, but merely due to "coincidence" of having chosen a bad apartment room. However, there is a notable theory that Henry was "chosen" and him choosing Room 302 wasn't entirely a "coincidence".

Henry shows altruism throughout the game: he is constantly trying to help the people he meets, regardless of his own situation. A good example of this is when he and Eileen Galvin meet Joseph Schreiber, since Henry keeps Eileen behind him until Joseph leaves. He also zaps his hand while trying to save someone from being electrocuted. When Eileen is frightened by his appearance when she awakens in the hospital, he also tries soothing her by hugging his neighbor and telling her to relax; she then starts calming down as she recognizes him.

In the beginning of the game, Henry is locked in his apartment, Room 302 of South Ashfield Heights. He has gone mostly unnoticed in his apartment for the past two years; he passes his next-door neighbor Eileen Galvin occasionally, and they give each other nodding glances of acknowledgment and courtesy, yet no further relationship develops. He is equally distant from his other neighbors, most of whom he seems not to know by name and vice versa.

Henry is trapped inside of his apartment for a total of five days before a strange hole suddenly appears in his bathroom. Wondering if he can escape using this route, he decides to crawl inside, waking up to find himself sitting on an escalator in a subway. In this world, Henry meets Cynthia Velasquez, a woman who believes she is dreaming. Cynthia flirts with Henry and promises him a "special favor" if he helps her find a way out of the subway station. He never accepts or declines her offer, but decides to help her anyway. The two travel together until Cynthia becomes separated from Henry. This happens twice, and when reuniting with her for the second time, he finds her alone and bleeding in a room. As she dies, she asks Henry if everything that has happened is just a dream, which he assures her it is. After she dies in his arms, he leaves and finds himself waking up in his apartment to the sounds of an ambulance outside. Upon examining it, there is indeed an ambulance at the entrance at the subway, which is most likely retrieving Cynthia's body.

The next time Henry ventures into the hole, he awakes in a forest, which is located near Silent Hill. He meets a troubled man, Jasper Gein, who speaks of a ritual and of "the Devil". Henry later finds a little boy, who he attempts to talk to, but runs away when Jasper begins frantically predicting that "something's gonna happen" right after mentioning the "Third Revelation". Henry eventually comes across the Wish House Orphanage, where he sees Jasper yet again. Jasper tells Henry that the door is locked, and if Henry can get him something to drink, he will award him with something. After giving him chocolate milk, Jasper offers Henry a blood-inscribed spade, which helps him find the key to the orphanage. Once inside, he reads a passage out of a religious book, but is interrupted by the screaming of Jasper. He goes to check on him to see the man on fire, scrawling numbers into his chest, and screaming that he met "the Devil". Henry merely watches as he eventually burns to death and wakes up in his apartment once more.

The next place Henry wakes up in is a cylinder-shaped water prison. He finds a man locked in a cell, who pleads to Henry to get him out. After venturing the prison for a while and learning how to move the cell rooms around using a valve, he is able to free the man from his. When he travels back to the room where the man is, Henry sees him muttering to a little boy - the same one from the forest - in fear. The boy eventually leaves, and Henry is able to learn that the man's name is Andrew DeSalvo and that he worked at the prison. He also learns the name of the little boy, which is Walter Sullivan. Andrew goes on about how Walter was obsessed with the Descent of the Holy Mother ritual and strays away from Henry while mumbling to himself. When Henry enters the torture chamber in the lower levels of the prison, he finds Andrew, long dead and having been drowned.

Again, Henry finds himself waking up in a strange place. This time, it is a building that is located near Henry's apartment. He hears the sound of someone screaming, who happens to be a man named Richard Braintree. He appears to have fallen from the sky, or perhaps some sort of ledge from above. Alarmed at Henry's presence, he points his revolver at him, but then puts it back down, realizing that Henry is "a real person". The two go on to talk about their similarity in experiences dealing with "these freaky worlds" and then begin a conversation about Joseph Schreiber, the man who lived in Henry's apartment before him. Richard leaves with Henry telling him to watch out for the boy (Walter Sullivan), but Richard seems not to take the statement to heart. While riding an elevator down, Henry sees Richard again, this time with the little boy. Frightened of Richard, the boy runs, but Richard follows. By the time Henry catches up to them, Richard is strapped down in an electric chair and is slowly dying. Henry tries to help, but is electrocuted in the process. Richard tries to tell Henry that the child is not who he appears to be, but dies shortly after.

In the apartment world, Henry questions whether Eileen Galvin or Walter Sullivan is the next victim (having not known what Walter looked like as an adult yet). When Henry enters Eileen's room, he watches her as she seemingly dies, and he falls to the floor in grief. Henry is able to create a new hole and while exploring St. Jerome's Hospital, Henry sees photographs and x-rays of Eileen and wonders if Eileen is still alive. Henry soon finds her, and they reunite to find the "ultimate truth". It is around this time Henry finds out only he (not Eileen, who he attempts to take with him) can use the holes that transport him back to his apartment. Using a key given to him, he unlocks a spiraling staircase that he uses to re-visit the first four of Walter's Otherworlds. All the doors that were previously locked (marked with Halos of the Sun) can now be opened in the worlds.

At the end of the staircase, Henry and Eileen find a diary in front of Room 302 of the past, where he meets the ghost of Joseph Schreiber and obtains the Pickaxe of Hope. Joseph explains what he's learned about Walter Sullivan to Henry, completing Henry's role as the "Receiver of Wisdom". Going back into the current Room 302, Henry uses the Pickaxe to discover a secret room in between his bedroom and bathroom. Here, he discovers the corpse of Walter Sullivan nailed to a cross and finds the Keys of Liberation in the corpse's coat pocket. Using this, Henry escapes Room 302 to find he is in the apartment world again, where he reunites with Eileen. They then retrieve Walter's umbilical cord from the Superintendent's room. Afterwards, Henry returns to the room with Walter's corpse to find that it has disappeared. Jumping down the hole below the cross, Henry finds himself in a final confrontation with Walter and his "true form".

Because a canon ending for Silent Hill 4 has never been confirmed, it is unknown what Henry's fate is.

Wallpaper.
Add a photo to this gallery

Henry discovering the hole in his bathroom.

Henry wakes up on the escalator.

Henry in the Forest World.

Henry in the Water Prison.

Henry in the Building World.

Henry in the Apartment World.

Henry wakes in the Hospital world.

Henry leading Eileen into a Halo of the Sun.

Henry after exiting the hole.

Henry asks little Walter if he has a mom or dad.

Henry in the lobby of South Ashfield Heights.

Henry awakens from a fetal position in Room 302's core.

Henry looking at Walter.
Add a photo to this gallery

Henry swinging the Pickaxe of Despair.

Walter attacks Henry.
Add a photo to this gallery 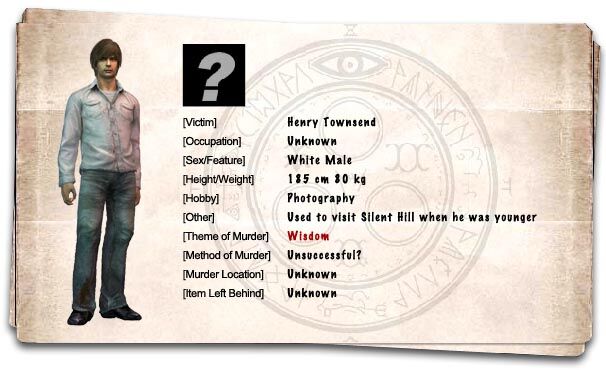 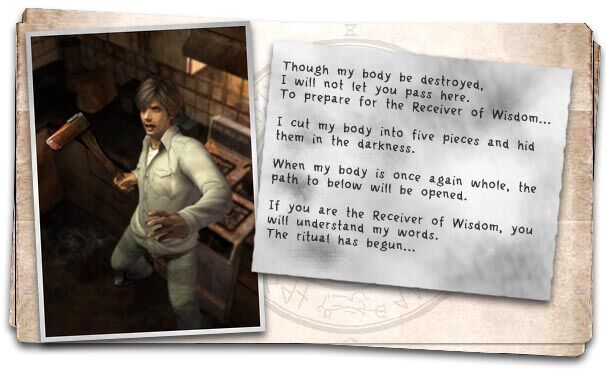 Retrieved from "https://silenthill.fandom.com/wiki/Henry_Townshend?oldid=204748"
Community content is available under CC-BY-SA unless otherwise noted.