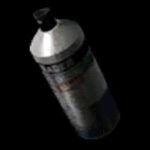 The Hyper Spray is an unlockable weapon in Silent Hill 2 and Silent Hill: Book of Memories. It can be obtained once the player does one of three things: complete the game on hard mode, complete it twice (at least once on Normal), or complete the game three times, regardless of difficulty level. It is then found inside the motor home on Saul Street.

The spray can be used in bursts by pressing the attack button but can also be used continuously by holding the attack button. The Hyper Spray does not require ammunition; however, it must be shaken to "recharge" after prolonged use. A major setback to using the spray is that it affects James Sunderland as well, gradually draining his health should he use it for an extended period of time.

There are four different kinds of Hyper Spray in the game. The Hyper Spray received is determined by ranking achieved at the end of the previous game. All sprays have the effect of paralyzing the enemy for a set period of time, save for the green spray.

The purple spray is the weakest spray, but it is somewhat difficult to obtain as a ranking below 2 stars is required. It can still immobilize enemies, but there are some noticeable differences. One such difference is its ability to knock down Lying Figures, but not harm them and prevent them from being kicked. It also immobilizes all monsters and bosses with the exception of the last boss. This is most likely to help the player who had earned a low ranking.

The white spray is the most commonly-obtainable spray, requiring a ranking between 2 to 7.9 stars. It can be used to paralyze most enemies and bosses without doing any damage. Specifically, it has the ability to completely defeat Creepers and chase away the final boss's moths.

The yellow spray is unlocked after achieving a ranking within 8 to 9.9. The main differences with this and the white spray are in its new color and slightly longer immobilization period and ability to make Mannequins fight each other.

The green spray is the best version available and can only be used after achieving a 10 Star Ranking. Rather than simply stunning the enemies, the green spray instantly kills them. This, of course, does not apply to bosses that don't physically die, such as the first battle with Pyramid Head. In such cases the fight simply ends as it is meant to.

The Hyper Spray in is a rapid-fire wildcard weapon and works best when used against the swarm, although it makes for good crowd control against clustered monsters as it tends to make monsters' movements stutter and does constant damage in a moderate cone of effect. Its color is purple.

James shakes the can to "reload" Hyper Spray.

Fan made replica.
Community content is available under CC-BY-SA unless otherwise noted.
Advertisement