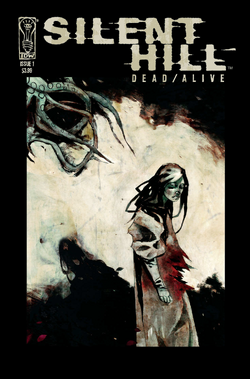 The comic was released December 2005 and is written by Scott Ciencin with artwork by Nick Stakal and lettering by Tom B. Long. The issue was edited by Dan Taylor and published by IDW Publishing.

The comic opens with Christabella narrating about Silent Hill. She then wakes up in a room with Troy Abernathy, and the two drive away in his car.

Meanwhile, Connie Mills is working at a health care clinic in the small town of Ashton, Vermont. She encounters an old lady, who begins to gossip with her about actor Kenneth Carter, of whom she used to be in a relationship with. As Connie tries to get her off the subject, the clinic starts to fade into the Otherworld. She is then grabbed behind by a monster and disappears.

Back in Silent Hill, Christabella complains about the paradise Lauryn turned Silent Hill into. She wakes up later that night to find the darkness of Silent Hill returning with Troy unconscious, much to her delight. However, she is unable to get to Lauryn due to her Lauryn's door being chained up in a similar manner to Henry Townshend's room in Silent Hill 4. She then encounters some demons and calls out to them to break down Lauryn's door. They instead bite her, and Christabella comes to the horrific realization that she is alive.

In Hollywood, Kenneth is in his bedroom with his new girlfriend, Jessica Aldrich, and greets his dog, Bear, as he enters. Kenneth then gets a call from a private investigator, whom he has hired to find his unknown parents. The investigator instead informs him of Connie's disappearance, and Kenneth is noticeably worried. Jessica rants about how he only cares about Connie, and promptly turns into a demon.

The comic cuts back to Christabella, who is being attacked by the monsters, as she runs into an antique store for safety and is confronted by a mysterious force who threatens to dispose of her for opposing the Order. She proposes a deal.

Back in Hollywood, Kenneth is seen washing his face in a mirror, trying to convince himself that what he saw was just an illusion. He sees his eyes start to bleed, but realizes it is only in the mirror. The room starts to transform into the Otherworld, and seeing another monster, Kenneth breaks the mirror and slits its head off with a glass dagger. The paintings on his wall turn into strange portals, and Bear is seen jumping through one of them. A strange woman, who states her name is Lenora, appears before him and informs him of the new part he has to play. Lenora summons the Twin Victim, and they take him to Silent Hill.

In the town, Kenneth tells himself he needs to find Connie, and encounters Christabella, who pleads for his help. He agrees and she embraces him, smiling mischievously as her eye starts to bleed.

The comic was published by IDW Publishing in December 2005 with 5 different covers. The issue was later collected in the Silent Hill: Dead/Alive and Silent Hill Omnibus trade paperbacks. Finally, on November 2nd, 2011, the issue was re-released through Amazon Kindle and comiXology.

Credits page.
Add a photo to this gallery
Retrieved from "https://silenthill.fandom.com/wiki/Issue_no._1_(Dead/Alive)?oldid=196927"
Community content is available under CC-BY-SA unless otherwise noted.