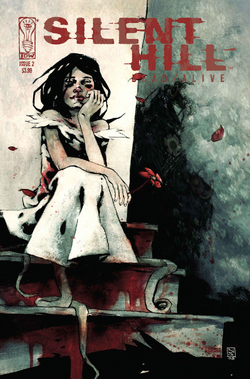 The comic was released January 2006 and is written by Scott Ciencin with artwork by Nick Stakal and lettering by Robbie Robbins. The issue was edited by Dan Taylor and published by IDW Publishing.

Kenneth starts remembering how he could enter the world that now surrounds him (a painting, he thinks, granted him a door to that world). He misses his dog, Bear. But now he's got companion, a little girl he found all alone in that town. Now together, Kenneth and Christabella walk through the streets of Silent Hill. There are a lot of creatures around them, though surprisingly they don't attack.

Still, Kenneth thinks they've got to find somewhere they can hide before any of the monsters reacts and starts following them. Some places are ruled out for he feels danger inside (Brookhaven Hospital and Alchemilla Hospital) based on dreams and paintings he's seen before. As they keep walking they find what looks like an abandoned movie theater; there can be food inside, so they walk in.

Everything is quiet and calmed down there. In an office Kenneth finds some photos and documents relatives to his past. He and Christabella enter the auditorium, where they find people sitting there, apparently watching nothing. They sit too for the curtains start opening as soon as they arrive to the room. The girl receives some kind of messages from around her, revealing that the innocent look she has is nothing but a carcass, and her task was leading Kenneth there. Then the show starts; to Kenneth's unease, it looks like a propagandistic movie about Silent Hill starring him ("The future", says Christabella when he asks "What is this?").

He wants to go out of there but then a woman appears on the screen: Connie Mills, an ex-girlfriend Kenneth's been looking for since Lenora pushed him into this reality. Connie tells Kenneth why he is there and shows him what's been happening in the real world: his actual girlfriend, Jessica, has been murdered. She has an axe crushed into her head, and on the wall there's an incriminating blood-written text, making Kenneth responsible for the murdering.

As he tries to deny it, Connie's appearance starts to change, her eyes bleeding. Then Kenneth recognizes her: it's Lenora who's been tricking him. She is trying to use him for her own plans of a new world... Another character enters then, Troy Abernathy, in a monstrous form; he's come to take his revenge on Christabella. As Kenneth is with her he's got to die too. Troy opens Kenneth's eyes first about the world surrounding them and the part Lenora is playing in it. When he tries to attack them, Christabella stops him with a spell that leaves her exhausted. Taking advantage of the situation, with Troy paralyzed, Kenneth takes Christabella (Lenora seemed afraid of her and he wants to use it) and gets out of the theater. Lenora sends the monsters behind them. When everything seems lost, someone new comes to scene: Ike Isaacs, who made the paintings of Silent Hill, appears with Kenneth's dog, Bear, ready to help them and raise some hell.

The comic was published by IDW Publishing in January 2006 with 2 different covers. The issue was later collected in the Silent Hill: Dead/Alive and Silent Hill Omnibus trade paperbacks. Finally, on November 2nd, 2011, the issue was re-released through Amazon Kindle and comiXology.

Credits page.
Add a photo to this gallery
Retrieved from "https://silenthill.fandom.com/wiki/Issue_no._2_(Dead/Alive)?oldid=196928"
Community content is available under CC-BY-SA unless otherwise noted.