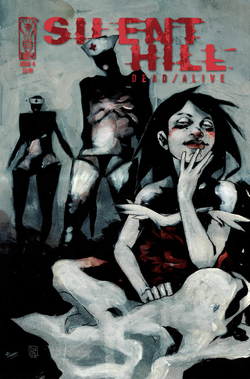 The comic was released March 2006 and is written by Scott Ciencin with artwork by Nick Stakal, coloring by Tom B. Long, and lettering by Robbie Robbins. The issue was edited by Dan Taylor and published by IDW Publishing.

Lenora the witch forces Kenneth Carter to choose one of his three companions to be killed: his dog Bear, the child Christabella LaRoache, or his ex-girlfriend Connie Mills, giving him until midnight, or else she will kill the three of them. Lenora suggest him to kill Christabella, wich makes the child rebel and attack Lenora; she can't kill her but it gives her time to run away. Bear escapes, too, leaving only Connie to be sacrificed. Sick and tired of it all, Kenneth refuses to kill Connie, cutting her chains and freeing her instead. In the real world, a witness is talking with someone at WTM Media about the crime she saw: Kenneth Carter murdering two people. She's been prepared by this person before she talks with the police. As that person tells her, his name is Whately.

Meanwhile, in Silent Hill, Christabella is lured by a boy to a jazz club. Once inside, the boy transforms into Troy Abernathy, who is still seeking revenge upon Christabella. She finds herself trapped in the club. Lenora has found Bear and tries to kill him, but the dog gets hold of the Keris Dagger she has and runs away with the knife. Lenora is about to be summoned by her boss.

Kenneth keeps walking through Silent Hill, and arrives to Lauryn's house, where Christabella told him she kept the book that gave Lauryn the power to reign over the Otherworld. Inside the house he meets the "victims" he killed in the real world: his girlfriend Jessica and the cop investigating the death of Jessica. Kenneth sees what they really are, mirages built to distract and use him. He makes his way to the room where the book is, finding someone familiar in there.

In the club, Troy is interrupted in his vengeance by Connie, who appears in a possessed state ("the empty vessel has been filled").

The comic was published by IDW Publishing in March 2006 with 2 different covers. The issue was later collected in the Silent Hill: Dead/Alive and Silent Hill Omnibus trade paperbacks. Finally, on November 2nd, 2011, the issue was re-released through Amazon Kindle and comiXology.

Credits page.
Add a photo to this gallery
Retrieved from "https://silenthill.fandom.com/wiki/Issue_no._4_(Dead/Alive)?oldid=196930"
Community content is available under CC-BY-SA unless otherwise noted.