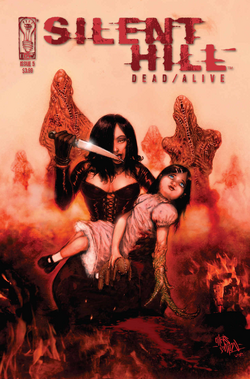 Issue no. 5 is the fifth and final issue of the Silent Hill: Dead/Alive five-part miniseries and continues the plot from the previous miniseries, Silent Hill: Dying Inside.

The comic was released April 2006 and is written by Scott Ciencin with artwork by Nick Stakal and coloring and lettering by Tom B. Long. The issue was edited by Dan Taylor and published by IDW Publishing.

A deadly game draws to a close as Christabella must escape from her greatest enemies and put herself in the path of malevolent beings that are neither angels or demons, but something worse... is she is going to stop them from setting the world ablaze and realize her own twisted plans for the monster-laden mist-enshrouded haunted town of Silent Hill? Or will she fail and suffer a fate worse than death at the hands of the town?

The comic was published by IDW Publishing in April 2006 with 2 different covers. The issue was later collected in the Silent Hill: Dead/Alive and Silent Hill Omnibus trade paperbacks. Finally, on November 2nd, 2011, the issue was re-released through Amazon Kindle and comiXology.

Credits page.
Add a photo to this gallery
Retrieved from "https://silenthill.fandom.com/wiki/Issue_no._5_(Dead/Alive)?oldid=196931"
Community content is available under CC-BY-SA unless otherwise noted.