View source
watch 02:17
New Pokemon Games - The Loop
Do you like this video?
Play Sound

Jasper Gein is a somewhat mentally unbalanced man who appears in Silent Hill 4: The Room.

Along with his friends, Bobby Randolph and Sein Martin, Jasper was fascinated by the mythology of the Order, making it his goal to find out all he could about the cult and its teachings. Unfortunately for Jasper, Bobby and Sein were killed about ten years ago.

While exploring the ruins of the Wish House Orphanage in a surreal world resembling Silent Hill Woods, Walter Sullivan immolated Jasper, who seemed almost appreciative of the act.

Henry Townshend meets Jasper while walking on a path through a forest outside of the Wish House. Jasper tells Henry about the origins of the stone he is sitting beside, Nahkeehona, also known as the Mother Stone. Henry leaves shortly after Jasper says that the stone is a "bit creepy".

Henry meets him again at the Wish House, at which time Jasper says he will give Henry something if he provides him with a beverage. Henry offers him chocolate milk, which Jasper promptly gulps down, and in return gives Henry a spade. Henry finds the key to the Wish House with the help of the spade; Jasper enters and disappears into one of the rooms.

Not too long after, Henry hears a blood-curdling scream and investigates the room that Jasper entered. Upon opening the door, Jasper is seen burning and writhing in agony. After Henry witnesses this act, Jasper shrieks that he saw "the red devil" he was searching for, and he traces the "17/21" carved into his chest with an altar candle and collapses, finally perishing from the burns. Jasper was killed with the "Source" theme of murder. His item for Walter's world is the same bottle of chocolate milk Henry gave him before he died.

His ghost, which is still aflame, haunts the Forest World during Henry's return. As a ghost, he wields the candlestick he used to trace the numbers carved into his chest before his death. His hits deal a considerable amount of damage, likely due to the fact that he's on fire. If Jasper is not pinned with a Sword of Obedience in the Forest World, his ghost will return in the Building World, near the level's end.

"Hey, the Devil is your friend? He will come here soon?" asked Bobby. Then,
the gentle student replied, "No... He is not my friend. Don't hide there. Come
up here guys." After hearing his calling, Sein showed up from the corner and
walked out to join them.

But Jasper could not join them because he was somehow scared and his legs were
shaking.

"C'mon, don't you wanna meet the devil?" To Jasper, the man's gentle voice
sounded like a devil calling him.

And suddenly he heard Bobby's scream and then Sein's voice screaming "Help
me!" echoing all over the place.

"Hey, still hiding there? Come on up buddy... You came here to see me, Jasper!"
said the man.

Jasper was so scared that he started to run away from him. He stopped running
in front of a drug store in a town, thinking it's OK here since I made this
far. He turned back, but the scary devil was gone.

After the incident, Jasper's friends Bobby and Sein were missing for a while.

Jasper sitting next to "Nahkeehona", the "Mother Stone".

Jasper talks about the Third Revelation.

"Ohhhh maaaan, that was awesome!"

Jasper pulls out a spade from his pocket.

Jasper on fire in the Wish House.

Jasper tracing the numbers 17/21 carved into his chest. 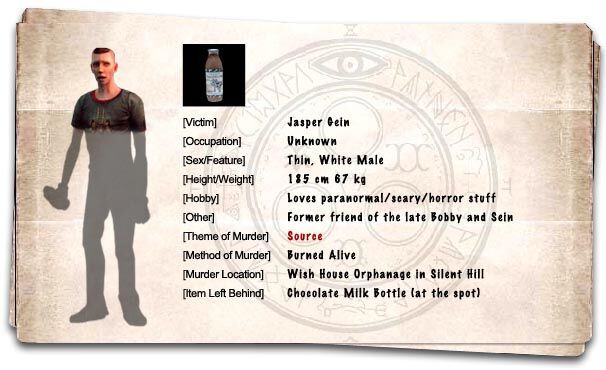 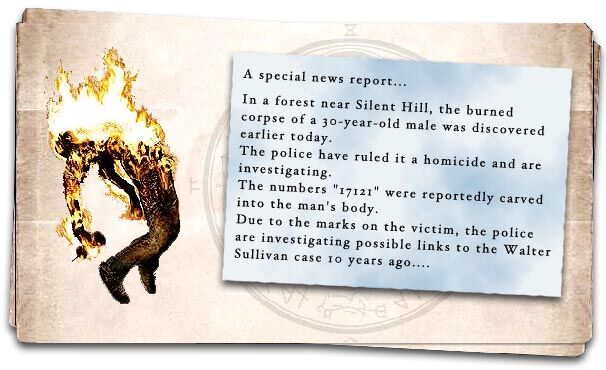