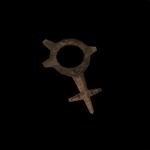 An unusual, metal object
Description
"A strange symbol. This symbol is made of metal and has the word 'Jocasta' etched into its base."
Purpose
Unlocks the doors to female seclusion in Cedar Grove Sanitarium
Location
Dr. Harris' Office, 1F, Cedar Grove Sanitarium
Variants
None
Appearances
Silent Hill: Origins

The Jocasta Artifact is an item found in Silent Hill: Origins. It is a heavy, metal sculpture of an unknown symbol used to unlock the doors barring access to the female seclusion wing of Cedar Grove Sanitarium. This leads to the game's first boss fight: Momma. The item can be located in Dr. Harris' office.

Retrieved from "https://silenthill.fandom.com/wiki/Jocasta_Artifact?oldid=202788"
Community content is available under CC-BY-SA unless otherwise noted.