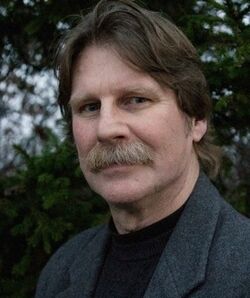 Most widely known as the composer of the P.C. Richard & Son “Whistle”. A former bassplayer, teacher, welder, lumberjack, stock car driver and custodian.

Leary moved on to start Soundsmith, Inc. in 1984, and bought out his partners in 1988. He has since been nominated for an Emmy, co-wrote a play that made it all the way to Off-Broadway (eight month run) and was a finalist for Survivor.

He has been a narrator for over thirty years gaining local fame with PC Richard & Son, David Lerner Associates & Newsday ads, garnering national recognition sharing duties with Larry Kenney for VH-1’s “Best Week Ever”. Leary has even voiced a selection of toys including: Robocop, Galactus, Stretch Screamers and numerous talking vehicles. His voice and gnarly face have appeared in animations, educational pieces, radio ads, films/documentaries and television shows/ads.

Retrieved from "https://silenthill.fandom.com/wiki/Leer_Leary?oldid=204258"
Community content is available under CC-BY-SA unless otherwise noted.