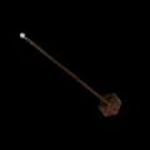 Light Stands are breakable weapons found in Silent Hill: Origins. Like all other melee weapons, they break after some use. They are most commonly found in Riverside Motel and function essentially the same as Drip Stands, albeit are only slightly quicker than the other. Despite the in-game description saying that the stand is missing the lightbulb, the model clearly shows that the lightbulb is very much intact. Travis Grady applies the light stand in frays via swinging it in a horizontal method; once the opposition has fallen, Travis will poise the light stand downward and stab the tip into the enemy.

Retrieved from "https://silenthill.fandom.com/wiki/Light_Stand?oldid=131299"
Community content is available under CC-BY-SA unless otherwise noted.