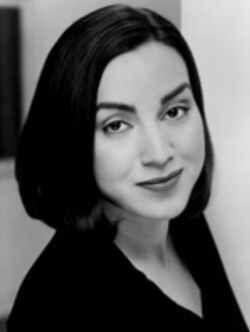 Lisa Ortiz is an American voice actress who voiced Cynthia Velasquez in Silent Hill 4: The Room. She was uncredited for the role.

Lisa was born on December 11, 1974 in New York and is bilingual, being able to speak English and Spanish. She graduated from Hofstra University with a B.F.A. in theater, and it was while there that she got an audition with Central Park Media through a friend who interned at the company on the Record of Lodoss War video game.

Lisa is currently the voice producer for DuArt Film and Video.

Lisa has voiced many characters from TV shows and video games, including Amy Rose from the Sonic the Hedgehog games and Kaku Bunwa from the TV series Ikki Tousen: Dragon Destiny.

Retrieved from "https://silenthill.fandom.com/wiki/Lisa_Ortiz?oldid=195659"
Community content is available under CC-BY-SA unless otherwise noted.