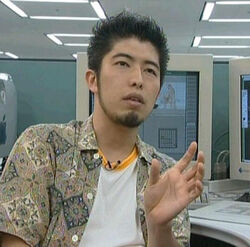 Masahiro Ito (伊藤 暢達[1] Itō Masahiro) is a designer and illustrator best known for his work as monster designer for the three first games in the Silent Hill series.

After the split of Team Silent, Ito did a few more contributions to the Silent Hill series, being credited with a "special thanks" for Silent Hill 4: The Room, drawing one of the alternate covers of Dying Inside volume 3, the art for the comics Cage of Cradle and Double Under Dusk, creating the cover art and the comic White Hunter for the Silent Hill: Origins soundtrack, and drew the covers for the Japanese versions of Silent Hill: Homecoming and Silent Hill: Downpour.

Non-Silent Hill related work includes drawing art for KIBA, a Japanese trading card game, and Metal Gear Solid 4. He has released an art book titled The 2nd Wild Pig, which is only available in Japan.

Ito is a prominent user of Twitter and can speak English, and as a result, he is essentially the only member of Team Silent who has kept in contact with the series' Western fanbase (apart from the voice actors such as Guy Cihi). As a result, he has provided insight into the series, mainly the first three games due to his involvement in them, such as what monsters symbolize, their inspirations, and occasionally plot details.[citation needed]

About Masahiro Ito work in Silent Hill 2.
Add a photo to this gallery
Retrieved from "https://silenthill.fandom.com/wiki/Masahiro_Ito?oldid=207513"
Community content is available under CC-BY-SA unless otherwise noted.