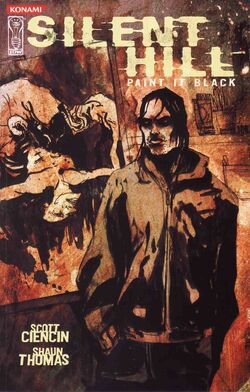 Paint It Black is an entry into the series of comics based on Konami's Silent Hill series of games. Paint It Black features art by Shaun Thomas and was released in 2005. It was later featured/reissued in the Three Bloody Tales trade paperback.

Taken from the back cover.

Writer Scott Ciencin (Dying Inside, Among the Damned) and artist Shaun Thomas (Among the Damned) return to bring you the tale of painter and semi-professional slacker Ike, who finds his dark muse in the mist-shrouded, monster-infested reaches of Silent Hill. Then the sexy survivalist-trained, gun-toting Cheryl and her teammates arrive to rock his world. Creatures attack, cheerleaders disappear and the gloves come off! Will anything survive?

Paint It Black follows the story of Ike Isaacs, an artist who finds himself homeless after being kicked out of a friend's apartment. Ike has been suffering artist's block until he meets a stranger who claims to have visited the ghost town of Silent Hill. The stranger informs Ike that he was able to leave the town because his own friend sacrificed himself. This story inspires Ike to travel to the town to seek out the truth behind it.

Oddly, the monsters of the town do not attack Ike, instead allowing him to paint them. Inspired, Ike is able to paint again; his portraits now feature the creatures that live in the town, and he has found that he is unable to leave. Moreover, his paintings have somehow been leaving and are being sold to rich clients outside of Silent Hill.

The story then takes an unusual turn as a team of cheerleaders arrive in Silent Hill looking for some friends who they believe went missing in the town. Ike soon accepts the cheerleaders as allies. As the plot continues to follow a strange set of developments, Ike discovers that he can actually travel through his paintings and he attempts to use them to escape. His attempted escape fails and he finds that the cheerleaders have turned on him, sacrificing him so they can leave town. Due to his alliance to the cheerleaders, the monsters turn on Ike.

Paint It Black received mixed to negative reviews from fans and critics, many criticizing the unlikable and unrelatable human characters with others praising the artwork and initial story concept.

Internet comedian Lewis "Linkara" Lovhaug reviewed Paint It Black on his webshow "Atop the Fourth Wall" – a show dedicated to making fun of bad comics. He describes it as "one of the worst comics he has ever read in his life", believing it to contain lazy artwork, unlikeable characters and an incomprehensible storyline.

Retrieved from "https://silenthill.fandom.com/wiki/Paint_It_Black?oldid=200062"
Community content is available under CC-BY-SA unless otherwise noted.