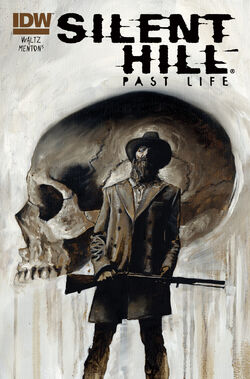 Past Life is a Silent Hill comic published by IDW Publishing. It was written by Tom Waltz, who also wrote Sinner's Reward. It is illustrated by Menton J. Matthews III with additional art by Riley Rossmo, letters by Chris Mowry and edits by Chris Ryall. Some aspects of its story are intertwined within Silent Hill: Downpour.

Its story is unique in that it is set in the mid-19th century, whereas all of the other installments and media have been set in the late 20th century and early 21st century (the earliest being Silent Hill: Origins, which is believed to take place in the 1970s). Its story is set just after the end of the American Civil War and the opening of Toluca Prison.

In 2015, it was re-released physically as part of the Silent Hill Omnibus Volume 2, along with Sinner's Reward and Anne's Story.

Jebediah "Hellrider" Foster is a violent outlaw in the Dakota Territory in 1867. When he falls for a godly widow who longs to move from the Wild West to a family home in Silent Hill, Foster follows – but peace is not what awaits.

Past Life, Issue 1 — Jebediah Foster and his pregnant wife, Esther Munroe, ride into Silent Hill and hope to start new lives. They take up residence in an old family house, where they have a disturbing encounter with an old Cherokee woman, Inola.

Past Life, Issue 2 — As Jeb becomes acquainted with the townspeople, Esther has a nightmarish vision of a young woman trying to give birth. Inola returns and kindly tells Esther to rest, for the sake of her child.

Past Life, Issue 3 — Esther continues to have nightmares, while Jeb realizes that he's met these "townspeople" before. All too late, he regrets coming to Silent Hill.

Past Life, Issue 4 — When Esther goes into labor, Jeb tries to get into the house, but the victims of his past stand in his way. The only "assistants" Esther has for the delivery are Inola and her daughter Awinita, who have both been waiting for the baby as retribution for Jeb's darkest sin.

Past Life received mostly good reviews from fans and critics. It was praised heavily for the artwork and for developing the history of Silent Hill prior to the games, with writer CJ Melendez of Rely on Horror saying that "no better adaption of the series" had been made to date. Some were critical of what they considered predictable story beats, however, as well as the use of amnesia as a plot device.

Retrieved from "https://silenthill.fandom.com/wiki/Past_Life?oldid=200085"
Community content is available under CC-BY-SA unless otherwise noted.