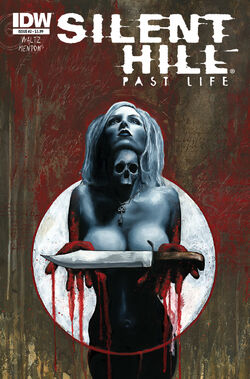 Past Life, Issue 2 is a Silent Hill comic published by IDW Publishing. It was written by Tom Waltz, who also wrote Sinner's Reward, and was illustrated by Menton J. Matthews III.

Jebediah Foster sits in bed with Esther Munroe, worrying that with all the sins he has committed, it might be too late for him to start leading a good life. Esther reassures Jeb that things will turn out okay, then reveals herself as a macabre, skeletal creature. Jeb awakens from this nightmare.

In the morning, Jeb leaves to talk to the local sheriff about Inola. In town, Jeb runs into Howard Blackwood, who informs him that Sheriff Seth Creviston is currently at Toluca Prison, overseeing its conversion from a POW camp to a normal prison. Jeb briefly experiences déjà vu upon hearing Creviston's name.

While waiting for Creviston's return, Jeb goes to Leek's Tavern and meets the owner, Jonas Leek. Jonas's wife, Helene, comes in and behaves very seductively towards Jeb, emasculating and embarrassing an increasingly hostile Jonas. She acts as if she and Jeb are former lovers, and even calls him "Hellrider." Creviston suddenly enters and defuses the situation.

Meanwhile, back at the house, Esther sweeps on the porch as the creature from Jeb's nightmare watches nearby. Esther suddenly has a chilling vision of a young woman struggling to give birth while her mother tells her, "Hurry! They're coming!" Esther passes out.

Creviston assures Jeb that Inola is harmless. Jeb disagrees, showing him the knife that Inola left at the house. However, Creviston cryptically suggests that the knife really belongs to Jeb, and that he just forgot about it.

As Esther wakes up on the porch, Inola appears and helps her into the house. Esther tells her that Jeb went to report her to the sheriff, and worries what might happen if he comes back and sees Inola. Inola tells Esther to rest for the sake of her baby and, before leaving, remarks on the irony of a criminal like Jeb reporting to the sheriff.

Retrieved from "https://silenthill.fandom.com/wiki/Past_Life,_Issue_2?oldid=170118"
Community content is available under CC-BY-SA unless otherwise noted.