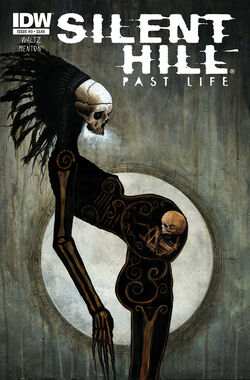 Past Life, Issue 3 is a Silent Hill comic published by IDW Publishing. It was written by Tom Waltz, who also wrote Sinner's Reward, and illustrated by Menton J. Matthews III.

Two weeks after Issue 2, while cutting firewood near the house, Jebediah flashes back to his "Hellrider" days. It turns out that he has met Jonas and Helene Leek before: Helene carried on an affair with Jeb, until one day Jonas came home and found the two. In a rage, Jonas took Jeb's knife and tried to stab him, but Jeb used Helene as a shield, killing her. He then shot Jonas dead, took back his knife, and left.

In the present, Jeb is interrupted by Howard, who is passing by on his mail run. The two converse, and Jeb confides his feeling that there's something abnormal about Silent Hill. Howard says the town has a way of reminding people of the past, and brings up the legend about this land being filled with spirits. Howard speaks vaguely of his own past, of the hardships he endured as a slave, and of how he has even killed in self-defense. Jeb then tells of his time as a murderous outlaw—which was mostly brought on by his drinking—and of how Esther nursed him and helped him leave that life behind. However, Jeb defends himself by revealing that many of his victims were Native Americans he had been hired to kill by aristocrats or government officials, and thus claims that they don't count. Before leaving, Howard ominously says that "it all counts."

On Sunday, Esther has a nightmare of the same woman urgently trying to birth her child with her mother's frantic assistance. After waking up, she and Jeb prepare to go to the town's church, which she wants to visit before the baby's arrival. Jeb notes her ill complexion and advises her to rest, but she insists that she needs to go.

At the service, Jeb sees Seth Creviston and has another flashback: he once stole a sheep from a farm and cooked it. Sheriff Creviston tried to arrest him, but Jeb used his knife to slash one of Creviston's eyes out. Perturbed, Jeb takes Esther and leaves the church. Riding back to the house, Jeb declares that he's done with this town.

As Esther enters the house, Jeb goes to the barn and begins drinking the whiskey, oblivious to the fact that the skeletal creature is watching him, its belly very pregnant.

Retrieved from "https://silenthill.fandom.com/wiki/Past_Life,_Issue_3?oldid=195516"
Community content is available under CC-BY-SA unless otherwise noted.