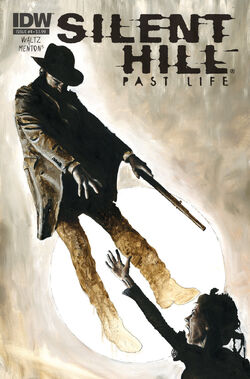 Past Life, Issue 4 is a Silent Hill comic published by IDW Publishing. It was written by Tom Waltz, who also wrote Sinner's Reward, and illustrated by Menton J. Matthews III.

Jebediah sits in the barn, drinking and contemplating his old knife. Esther suddenly goes into labor, even though it's too soon. Inola and the skeletal monster—Inola's daughter, Awinita—enter the room. They lay Esther on the floor and prepare to "assist" the delivery.

Jeb hears Esther scream, but Helene appears and tries to seduce him. Jeb kills her by sinking the knife into her chest—the same way the real Helene died. Jonas then appears and tries to kill Jeb for stealing his wife, but Jeb shatters an oil lantern on Jonas' head, setting him ablaze. The fire spreads to the house.

Esther realizes that the pregnant woman in her nightmares is Awinita, and Inola is the one telling her to hurry before "they" arrive. Now, Inola echoes those words to Esther and tells her to push.

Creviston stands in Jeb's way, telling him that this is not about Jeb or Esther—it's about the baby. In defiance, Jeb kills Creviston with an axe.

Under Inola's instruction, Awinita seemingly "merges" with Esther, causing their babies to become one.

Jeb enters the house, and a final flashback reveals his darkest sin: during his mission to kill the Cherokees, he found Inola and Awinita, who was giving birth. Jeb took out his knife and killed the baby.

Esther delivers the baby, and Jeb tells Inola to take it and leave. He then cradles Esther, who appears to be dead. It is unknown if Jeb escapes the burning house, leading to ambiguity of his fate.

Outside the burning house, Inola meets Howard and introduces the baby as her daughter, Awinita. Howard calmly inquires about the fire, and Inola replies that the spirits of Silent Hill are no longer silent, that the fires burn for them, and that "they've only just begun..."

Alternate front cover
Add a photo to this gallery
Retrieved from "https://silenthill.fandom.com/wiki/Past_Life,_Issue_4?oldid=195518"
Community content is available under CC-BY-SA unless otherwise noted.