This article is a guide for a Silent Hill puzzle.

The Piano Puzzle appears in Silent Hill, and is the second puzzle to appear in Midwich Elementary School after the Old Man's Hand puzzle. Harry Mason receives the Silver Medallion after successfully completing the piano puzzle.

The piano puzzle is found in the music room on the second floor of Midwich Elementary School. After finding the Gold Medallion and placing it into the clock tower, the piano will open, revealing the keyboard. The center keys (seven whites, five blacks) are covered in blood. Harry must hit the right sequence of keys for the Silver Medallion to fall over — the last item needed to unlock the clock tower doors.

The clue for this puzzle is a poem, stuck to the classroom blackboard, entitled A Tale of Birds without a Voice.

Then came a silent Dove,
flying beyond the Pelican,
as far as he could.

A Raven flies in,
flying higher than the Dove.
Just to show he can.

A Swan glides in to find a peaceful spot
next to another bird.

Finally, out comes a Crow,
coming quickly to a stop, yawning and then napping.

Who will show the way?
Who will be the key?
Who will lead to the silver reward?

The idea behind this puzzle is to hit the silent notes on the piano in the right order, hence the title of the poem ...Birds without a Voice. Five out of twelve keys are muted. All of the birds are either black or white like the keys, so reading from the poem, Harry has to figure out which bird relates to each (silent) key.

The final solution in the proper order is: 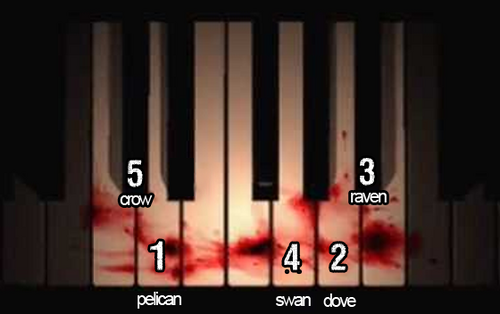 Retrieved from "https://silenthill.fandom.com/wiki/Piano_Puzzle?oldid=193986"
Community content is available under CC-BY-SA unless otherwise noted.