The Puppet Nurse (also known as Monsterized Nurse) is an enemy appearing in Silent Hill. It is affected by the same parasite as the Puppet Doctor.[2]

The most distinguishing feature of the Puppet Nurse is the large, slug-like parasite that grows out of their backs, causing them to hunch forward when they walk. The parasite itself is portrayed as a separate living entity, as it can be seen moving independently from the nurse's movements and usually dies shortly after its host body dies. The parasite that controls the Nurses is the same type that controls Cybil Bennett after she becomes possessed. Puppet Nurses can be seen with blue or green attire, as well as different hair colors.

The nurses wield scalpels as weapons, wandering the hospital with sluggish, slow movements all the while voicing groans; this dismal moaning becomes even more intense when attacked and killed. They sometimes cooperate; a Puppet Nurse may grapple Harry Mason while another one stabs Harry with a knife. This cooperation is a common characteristic among parasitic hosts, even in the real world. When the Nurses are knocked down by a strong blow such as the hammer, they will flail and struggle on the ground wildly before going limp.

Combat with the Nurses can be avoided; by turning off the flashlight, Harry can sneak by them undetected. If combat is unavoidable, it is best to either utilize the handgun or the hammer since one or two hits (or three in on hard mode) from the latter should defeat them. If the player is yet to obtain the hammer, the handgun is rather more effective than the pipe, since the nurses can still hurt the player considerably when attacking due to the speed of their swipes and their tendency to attack in groups. With the handgun, it should only take six to eight shots to cripple them, allowing the player to deliver the death blow. Handling the nurses in a group can be tricky, but it can be made easier by following these guidelines:

The puppet nurses, controlled by a parasitic creature, symbolizes the cult's control over others. Although they were not necessarily members themselves, they were acting as puppets of the Order by keeping her alive. Alessa may have also observed the cult blackmailing Lisa Garland with her drug addiction.

The parasite could be representative of Alessa's feeling toward God within her, or may yet be products of God itself attacking the townspeople, as Aglaophotis is effective against them.

Close-up of a blonde Puppet Nurse.

A Puppet Nurse reaching her neck with her hands after being damaged.

A Puppet Nurse bleeding to death on the floor.

Beta model.
Add a photo to this gallery

A Puppet Nurse attacking in Play Novel: Silent Hill.
Add a photo to this gallery 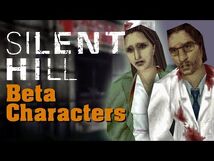