View source
watch 02:52
Roblox: DeepWoken - The Loop
Do you like this video?
Play Sound

Richard Braintree is a character in Silent Hill 4: The Room. He is Henry Townshend's neighbor from Room 207.

Richard lived in Room 207 of South Ashfield Heights. He is an eccentric, angry and somewhat violent or possibly sadistic man who carries a revolver along with him.

Richard also seems to be on good relations with Eileen Galvin, as Richard and Eileen are seen having a friendly conversation together.

When Walter Sullivan traveled to South Ashfield Heights as a small child, Richard often noticed him. Richard was suspicious of Walter, and was often aggressive with him, as he believed Walter didn't belong there. As a child, Walter wrote that "The city is scary and the apartment where mommy is has a scary guy in it."

An incident occurred where Richard peeled off the clothes of a man named Mike, who was a perverted stalker living in the apartments who was despised by the other residents. As Walter was in the crowd and saw Richard holding bloody clothes, Walter may have misunderstood the situation and thought that Richard literally "skinned" Mike and that he was a homicidal killer.

Richard can appear before entering the Building World by examining the peephole, where he and Eileen Galvin are standing outside Henry's door.

There is also an extra scene where Richard appears alone outside of the door, staring into the peep-hole before walking away down the hall. This scene can be viewed upon constantly checking the peep-hole between visits to the apartment.

Henry Townshend first meets Richard Braintree personally in the building world on Hotel South Ashfield. He appears to inexplicably fall out of the sky and suddenly points his revolver at Henry, but realizes that he is another resident of his apartment building. Richard tells Henry he wants to find a way out and suddenly leaves.

Later, as Henry enters and descends through an elevator, he sees Richard chase a young Walter Sullivan, having recognized him.

Henry makes his way to a large staircase when he suddenly hears Richard's scream. When Henry reaches the top of the staircase, he finds a replica of Room 207, Richard's own apartment room. He enters Room 207 and sees the child Walter point outside a window at Room 303 and eventually disappear into thin air. Henry tries to help Richard, who is being electrocuted in an electric chair, with "19/21" smeared onto his forehead. Richard tells Henry, "A kid? That's no kid... It's the 11121 man." Henry is unable to free him and is forced to watch him die. Richard was killed with the 'Chaos' theme of murder. His item left behind is his trademark revolver, which Henry can later obtain as a weapon.

Richard's ghost haunts the building world in the game. When he first appears, he is standing on a ledge and falls off. Unlike the game's other ghosts, he does not float, but he attacks with great celerity and is able to teleport and "phase" across medium distances, making him a dangerous enemy. As a victim of an electric chair, Richard's skin is black and somewhat "fried", and his clothes are also burned and charred. As he walks, Richard keeps twitching and emitting static sounds, due to his electrocution. He moves erratically, even to the point where it seems he does a certain motion, such as swinging his crowbar, backwards.

"Hey, Richard's gone nuts again."
"He lost his temper this time."
"I'll bet next time will be even more fun."

The residents of South Ashfield Heights enjoyed talking about him. He was famous for his short temper.

The worst incident was when Mike, the resident of Room 301, bumped into Braintree's shoulder in the corridor of the apartment unintentionally. At the time Richard was even more moody than usual. He yelled, "Who do you think I am?", and dragged Mike by the collar of his shirt into his apartment, Room 207.

"Not again", said the crowd from the apartment, and they went to Room 207 to see what was going to happen. Suddenly, the door opened and a stark-naked Mike came out of the room. Right after that, Richard came out of the room, holding Mike's shirts and jeans soaked in blood.

"How do you like that, you sick little freak? You had it comin' to you!", said Richard as Mike ran away from him. Richard threw away Mike's clothes and said, "These clothes are disgusting. Get 'em outta my sight!"

Then a middle-aged woman in the crowd said, "I know... It'll be perfect to wrap his body in", and she took the jeans.

"Hold it. Hold it... I think I'll keep that one for myself", said a drunk, and he took the shirt.

After that, Richard took a look into the crowd and noticed a little boy among the crowd and yelled, "You! You snoopin' around again?! Get your ass outta here before you really piss me off!"

Richard in the hallway.

Richard in the hallway.

Eileen and Richard in the hallway.

Richard and Eileen in the hallway.

Richard sleeping in reality while trapped in the Otherworld.

Richard in the building world.

Richard talking to Henry at the start of Building World.

The number 19/21 carved into his forehead. 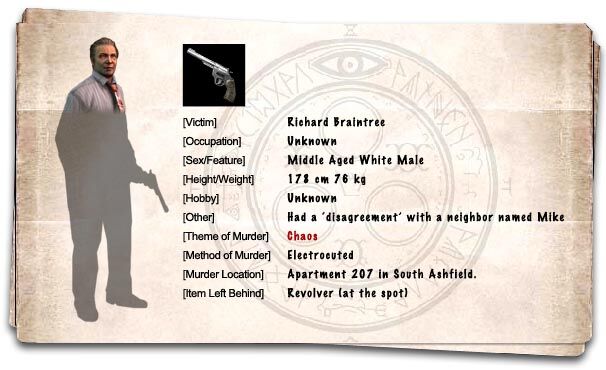 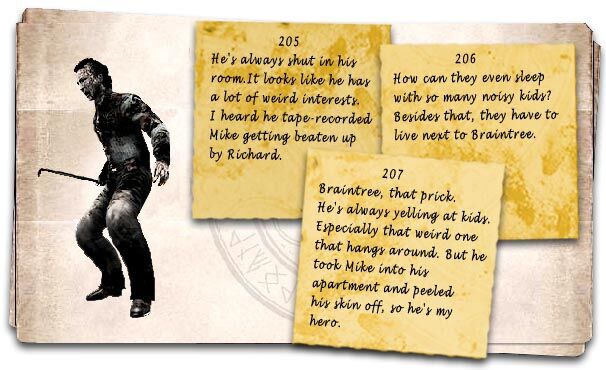