Save Points are used in the Silent Hill series as a tool to save the player's progress during the game. They change form and appearance in each game, and there seems to be an important meaning behind each one of them.

In the first game, the player can save their progress in the game by finding a notebook with a pen. This specific save point can be found for the first time in the Cafe 5to2, just before the protagonist Harry Mason is attacked by the Air Screamer monster. It is possible that the save point takes the form of a notebook mainly because Harry is a writer. A few of these save points even serve the story of Silent Hill 3 as they take the form of memos left behind by Harry for Heather.

In Silent Hill 2, the save point takes the form of a small, bright red rectangle and is the same size as Mary's letter. It can found for the first time inside a well, in the beginning of the game. At first glance, it looks like a simple, red sheet of paper, sometimes stuck on walls. It may represent that James Sunderland can only think about Mary and her mysterious letter the entire time he's in Silent Hill. He appears to show some discomfort and an intense pain in his head when he stares at it.

By the end of the game, James will get his last chance to save the game, with nine red papers stuck on a wall. The guidebook says the final save point has to do with James's memories no longer being repressed.[1]

The number nine is associated to the treble faculties of three. Thus being, the nine save points could represent the Seal of Metatron, as a central triangle inside in a circle forming two more triangles in each side, if taken into account that there are two printed images of it on the rug in the chamber where the last Pyramid Head encounter occurs.

As the paper glows red and features James' head, this may be a reflection of the same dark side in him that gave substance to Pyramid Head. Thus, the pain James feels in his head when looking at it may be the same pain Pyramid Head seems to often display.

In Silent Hill 3, the protagonist Heather Mason encounters the Halo of the Sun symbol throughout her journey, and it starts to bring up strange memories from her past and from her true self. Heather finds the Halo of the Sun for the first time in a mirror in the women's bathroom at the Central Square Shopping Center. She also appears to suffer from intense pain in her head when she stares at it. The symbol represents resurrection, which means that every time Heather dies, she'll come back automatically, even if that might be very painful for her. It appears in several different places, such as painted on a wall, stuck on the ground, or even inside a book.

In the fourth game, Henry Townshend has a red notebook inside his apartment room. It can only be used by going back to the apartment.

Travis Grady finds a small, red triangle with an eye many times during his trip in Silent Hill. It can be found for the first time in Alchemilla Hospital while Travis is looking for Alessa Gillespie. Its design and form may represent, in fact, the Flauros and its importance to the game. The eye might represent the "watchfulness" mentioned in the Halo of the Sun, and Travis, always being watched by Alessa.

In Silent Hill: Homecoming, the save point takes the form of the symbol of the Order, accompanied by a bright red glow. It appears to be a much simplified version of the Halo of the Sun.

In Silent Hill: Shattered Memories, the save point is not necessarily symbolic, but appears in the form of an option on Harry Mason's cell phone, which means that player can save the game any time and any where.

There are no save points for Silent Hill: Downpour. There is an auto-save function that saves the game at important parts, such as before encountering the Void.

In Silent Hill: Book of Memories, save points are located in the library.

A save point in Silent Hill.

Save screen background in Silent Hill.

The first save point of Silent Hill 2, in a well.

James Sunderland's face on the save screen.

Maria's face on the save screen in Born From A Wish.

Heather on the save menu background. 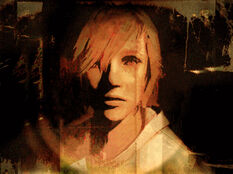 Heather's face on the save screen in Silent Hill 3.

The first save point in Silent Hill 3.
Add a photo to this gallery
Retrieved from "https://silenthill.fandom.com/wiki/Save_Points?oldid=190340"
Community content is available under CC-BY-SA unless otherwise noted.