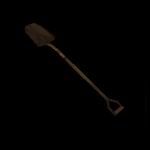 The shovel is an old, rusted, albeit quite powerful weapon that Travis Grady can find in Silent Hill: Origins. The shovel isn't as durable as other weapons found in the game, but it can damage an opponent immensely. The weapon can be found in Riverside Motel and in the streets of Central Silent Hill. For some reason, Travis describes it as "good for maiming bodies and burying them". Along with other subtle references in the game, this alludes to Travis' more questionable past, something that may be further hinted at from a memo found in Artaud Theater. In conflict, Travis will swing the shovel back and forth to stun an enemy and will finish it off by slamming the bottom of the spade against its body.

The shovel is much like its counterpart in Origins: a powerful and useful weapon for dispatching enemies. Murphy Pendleton can find many of them throughout his journey. They are the typical type, with a long wooden handle and a square metal head. Like all other weapons in the game, shovels are breakable, and their durability is mediocre at best. The shovel is also used to dig up buried items in the sidequest "Digging Up the Past".

Retrieved from "https://silenthill.fandom.com/wiki/Shovel?oldid=195211"
Community content is available under CC-BY-SA unless otherwise noted.