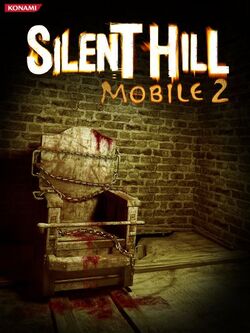 “The darkness of Silent Hill descends upon us once again. This is the second mobile outing for the horrifying Silent Hill series and is a follow up to last years critically acclaimed mobile debut.

The game takes place at a clinic in Silent Hill. The player first takes the role of Lucas, a man who can't remember his name and doesn't understand what is going on. He is in pain and his skin feels warm. Karen tells him his name is Lucas through telepathy, and directs him to "punish the man who is responsible" for his pain, telling him that said man is arriving at the clinic soon.

Lucas begins to search for clues about what is really happening, with Karen constantly telling him to either stop and wait for the man arriving or to give up and run away from the clinic. Eventually, Lucas discovers that Karen is a nurse working at the clinic in the Real World and finds a locker filled with dead fetuses. Seeing no more options, Karen reveals to Lucas that he was one of the orphans who died during the massacre at Sheppard's Orphanage and that she was trying to revive all of the orphans using some kind of witchcraft.

Feeling manipulated and betrayed, he meets Karen in her office and kills her with a steel pipe.

Later, Vincent becomes the playable character. He is told by an unknown voice to meet at the hospital in Silent Hill. There, he finds Karen dead in her office. He finds a prescription with a note reading "A pair of raindrops fell from the sky. As they landed on the ground, a child was born..." He finds another note in a wallet in a vending machine, "Half a decade later, he spoke his first words and said: "Let Me Go." Six weeks later he died." In the nightmare version of the basement, he sees a face coming out of the wall. It calls him "father" and tells him that Karen told him that he was the one to blame. After defeating it, Vincent receives a key. After using it, he hears a voice asking him if he really thought he could get away with it. The game ends here and says "to be continued."

Pocket Gamer gave Mobile 2 a slightly lower score than it gave to Orphan, critizing the lack of innovation, the long loading times and the use of the "easy plot device" of amnesia to kick-off the storyline. However, the review still praised the game for the atmospheric environment, pointing out that even through the game has few battle sequences, each monster encounter will frighten the player.[2]

Mobile Game FAQs praised the game for it's hard puzzles, citing that the player must think outside the box to find necessary items as they are not immediately obvious in the scenery. The review also praised the graphics, with a very fitting shading and colour palette. However, it critized the game for being short and for not having background music at all.[3]

Concept art
Add a photo to this gallery

A map of the clinic

Retrieved from "https://silenthill.fandom.com/wiki/Silent_Hill:_Mobile_2?oldid=203342"
Community content is available under CC-BY-SA unless otherwise noted.