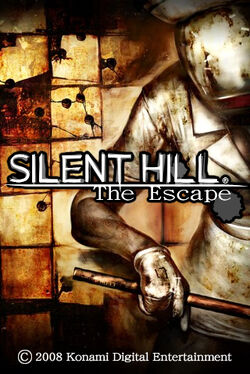 Silent Hill: The Escape is a Silent Hill spin-off game, featuring first-person shooter-style gameplay, for the iPhone and iPod Touch.

The Escape is a simply designed shooting game, where the player walks through hallways in a labyrinth trying to find the exit to the level they are on. The player can look around (limited to a certain range) by tilting the device, and movement is controlled by sliding the player's finger across the screen. Turning is limited to 90 degree turns.

The game's mechanics utilizes the gyroscope, in which players can tilt the phone to look around their current position. The protagonist's firearm is a revolver, and as such requires reloading after 6 shots have been spent. Instead of reloading each bullet individually, the protagonist carries a speed-loader, which replenishes all 6 bullets at once. The gyroscope is utilized here as well, as the player must align the speed-loader against the bullet's chamber accurately to reload all 6 shots; inaccurate alignment during reload means less bullets will be replenished in the chamber.

Enemies die by one gunshot to their weak spot, aside from the monsters that appear to be something of a Butcher/Pyramid Head hybrid, who take multiple shots and are protected by a moving shield. Once the player's bullet count has reached zero, they will no longer be able to use the gun. The player then has to attack by using a steel pipe. When using the steel pipe, the player must touch the screen in order to build up strength. When the screen is touched, a gauge will appear, building up strength. Once the gauge is full, the player can then release to attack. The game ends once the player is touched by a creature.

Human character in a game cutscene.

Robbie in the instruction stage.

The Silent Hill nurses appear in The Escape.

A Ceiling Monster which is unofficially named "Crawler".

The player must avoid the monsters to survive.

The player is killed by a Nurse.

To beat the game, find the key and get to the exit.

Learning how to shoot objects in the introduction stage.

The Butcher/Pyramid Head monster lumbers towards the player.
Add a photo to this gallery
Retrieved from "https://silenthill.fandom.com/wiki/Silent_Hill:_The_Escape?oldid=195557"
Community content is available under CC-BY-SA unless otherwise noted.