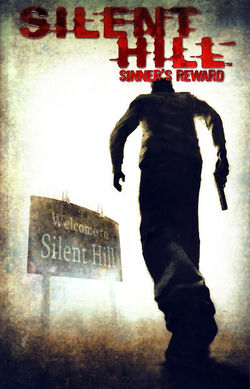 Sinner's Reward is the seventh collection of tales published by IDW Publishing to be based on Silent Hill.

Sinner's Reward is unique in that it lacks connection to any previous work published by IDW, and is the first comic written by Tom Waltz and not Scott Ciencin. It is illustrated by Steph Stamb.

In 2015, it was re-released physically as part of the Silent Hill Omnibus Volume 2, along with Past Life and Anne's Story.

"Jack 'The Pup' Stanton is a professional hitman for the Irish mob. Jill Conway is his lover, not to mention his dangerous boss's wife. Together, they are on the run from their dark pasts, hoping for a bright future. But some sins you just can't outrun, no matter how hard you try..."

Sinner's Reward, Issue 1 - Jack and Jillian are a day outside of Boston, when the pair stop at a filling station for gas and restroom breaks. Before they can get back on the road however, they are ambushed by the O'Conner Brothers and fellow hitman Jimmy Shea, hired by Finn Conway to bring the two back to Boston. The filling station owner, hearing the commotion, kills both O'Conner brothers. However, Shea escapes with Jill and takes off for the nearby town of Silent Hill...

Sinner's Reward, Issue 2 - Outside of town, Jimmy had been set upon by a pair of wolves and Jill is nowhere to be seen. When Jack's car runs out of gas within Silent Hill, he takes a pistol from the trunk and sets off to find his girl. Back in Boston, Finn is growing worried about the lack of communication with his lackeys, and sets off to see to this bit of business. Back in Silent Hill, outside of Pete's Bowl-O-Rama, Jack comes across Jill's dress, nailed to a wall. Before he can act, a monster bursts through the bowling alley wall...

Sinner's Reward, Issue 3 - Having killed the offending creature, Jack is chastised by a shaken Jill, dressed as nurse. While Jack had seen a monster, she did not. Running off, saying there is someone she needs to help, Jack gives chase, only to come across a young girl named Sara tied to a cross and surrounded by monsters. Killing the monsters, the pair become traveling companions. Sara explains that she had been with her parents, when she heard a siren, then only black. Soon, Jack and Sara run across the pair of creatures Jack had taken for wolves. Looking for shelter, the two enter Brookhaven Hospital. It falls into place; Jill must be inside.

Sinner's Reward, Issue 4 - Jack and Jillian have lived less than decent lives, but it's not too late for them. Sara, a prior victim of Jack's, offers the pair a choice; Hell, or Redemption.

Sinner's Reward received mostly mixed reviews from fans and critics. Many praised the artwork and story concept while criticizing it for having what felt like a rushed ending and a lack of consistency in the story's execution.

Retrieved from "https://silenthill.fandom.com/wiki/Sinner%27s_Reward?oldid=200067"
Community content is available under CC-BY-SA unless otherwise noted.