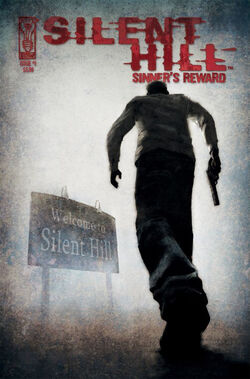 Sinner's Reward, Issue 1 is the first part in IDW Publishing's comic release based on Konami's Silent Hill series. Sinner's Reward follows the characters of Jack Stanton and Jillian Conway, lovers on the run from Finn Conway, Jack's employer and Jillian's husband. As the pair flees, they are found by a trio of thugs hired by Finn to hunt them down. Jillian is captured and ends up in the town of Silent Hill, with Jack hot on her trail.

Sinner's Reward opens in medias res, with Jack Stanton on his knees and holding a gun to his temple. For the first time in his life as a hitman, he finds himself terrified of pulling the trigger.

The story flashes back to Jack driving down a country road with Jillian Conway at his side. They make a pitstop at Charon's Bar-B-Q. As Jill goes to the restroom, Jack's internal monologue explains that for all of his life, he believed he was destined to be nothing more than a hitman, until he first laid eyes on Jill. Luckily for Jack, Jill felt the same way and wanted a change in her life, so the two eventually ran off together, and have been on the run for just over a day.

Jack talks with the filling station's attendant and pays for gas. However, when Jack walks back outside, he is ambushed by the O'Conner Brothers and Jimmy Shea, who have been hired by Finn Conway to retrieve his wife and the man who ran off with her. The thugs grab Jill and pistol-whip Jack to the ground, but the attendant comes out and kills the O'Conners with his shotgun. Jimmy Shea tosses Jillian in his SUV and drives off. Jack loses consciousness.

Jack dreams of his childhood and his father Michael, who was also a hitman. Michael believed that Jack was "born to kill," and taught Jack how to fire a gun. He later ordered Jack to carry out his first hit: Jack's dog, Digger.

When Jack comes to, the old man points him in the direction that Jimmy and Jill went: towards Silent Hill. Jack gets in his car and drives after them. As night falls, Jack finds Jimmy being mauled by dog-like creatures in the middle of the road. When Jack steps out of his car, the two creatures are nowhere to be seen, and he frantically looks around for Jill.

Jimmy suddenly rises to his feet and explains that Jill is waiting for Jack in Silent Hill. Jimmy then begins taunting the hitman, showing no concern when Jack raises his gun. Jimmy rushes Jack, who shoots and kills him. Jack returns to his car and continues driving to Silent Hill.

Retrieved from "https://silenthill.fandom.com/wiki/Sinner%27s_Reward,_Issue_1?oldid=195514"
Community content is available under CC-BY-SA unless otherwise noted.