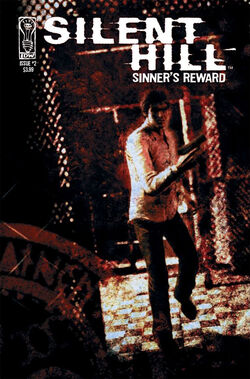 Sinner's Reward, Issue 2 is the second part in IDW Publishing's comic release based on Konami's Silent Hill series. Issue 2 continues the tale of Jack Stanton's struggle to find his missing lover and escape the nightmarish town of Silent Hill.

Upon arriving in Silent Hill, Jack runs out of gas, and decides to abandon his car. He retrieves several weapons from his trunk and begins in search for Jillian Conway.

Meanwhile, in Boston, Finn Conway has yet to receive an update from Jimmy Shea or the O'Conner Brothers. He begins to regret sending them to retrieve his wife, as he now feels that he should clean up his own mess. Finn decides to go after Jill and take care of the situation himself.

In the streets of Silent Hill, Jack is distraught to find Jill's bloodstained dress. He then encounters a large monster and bludgeons it to death, but Jill appears, dressed in a nurse outfit and pleading for him to stop. She mourns over the monster's body, treating the situation as if Jack just murdered an innocent person. She then turns hostile and admonishes Jack for what he's done, not just here but throughout his whole life. She goes on to explain that the two of them have created this hellish reality, and that all of their past victims are waiting. Jack states that Jill never did anything and thus can't have "victims," but Jill runs off.

Another monster confronts Jack, who recognizes its face: it is Tim Delaney, Jack's first hit under Finn Conway. Shaking off his bewilderment, Jack kills the monster and goes after Jill. He soon hears someone else screaming for help, and comes upon a young woman, Sara Linwood, tied to a cross and surrounded by more monsters.

Retrieved from "https://silenthill.fandom.com/wiki/Sinner%27s_Reward,_Issue_2?oldid=160825"
Community content is available under CC-BY-SA unless otherwise noted.